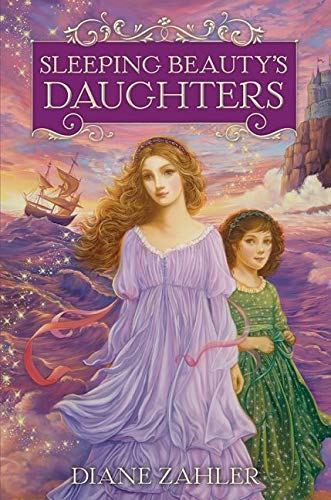 I’ve been meaning to read more fairy tale retellings, so of course I snatched Sleeping Beauty’s Daughters by Diane Zahler off the shelf at the library. I’ve already read two previous retellings by Zahler (Princess of the Wild Swans and The Thirteenth Princess), and was curious to see where she would go in this one.

The story focuses on Aurora and Luna, two princesses who have lived in seclusion all their lives. Near the beginning of the book, they learn that this is because their parents are trying to protect them. Their mother is Sleeping Beauty, who fell under her curse, to be awakened after a hundred years by their father. The evil fairy who cursed their mother has renewed the curse on Aurora too, dooming her to sleep for a hundred years and awake alone. When Aurora pricks her finger and begins the curse, she must struggle against Sleep to go on a desperate quest with Luna, in search of the fairy godmother who may be able to help her.

Similar to Princess of the Wild Swans, I thought this was an excellent book for middle grade readers…but a little lacking in tension for me as an adult reader. The characters’ struggles didn’t feel quite hard enough. Aurora discovers a tea that will help her remain wakeful, mostly solving that problem for most of the book, and the girls meet allies almost everywhere they go to help on their quest.  On the other hand, I do love that they go on a quest.  Much better than just sleeping and waiting for a prince to solve everything!

This was a fun, light read overall. I liked Aurora and Luna, especially in their differences. Luna is always the mischievous trouble-maker, while Aurora is the peacemaker and responsible one. Over the course of their quest, both girls learn more about themselves and realize those simple labels aren’t as true as they thought. I also enjoyed how well they balanced each other, and the strength of their relationship as sisters.

I would have liked more about their mother, and how the curse affected her, and her daughters by extension. We do hear that she was far more confident and strong-willed before the curse, and has now turned fearful and cautious—and I wish that had been more explored, along with how it affected Aurora especially (who takes more after her mother).

I did have one somewhat serious issue with the book…and it was the cover that led me astray! Looking at the two girls, I concluded that Aurora was a teenager, and Luna was perhaps ten. When Aurora pricks her finger, I assumed she must be sixteen, because that’s when these things happen (even though the book said that wasn’t guaranteed). Finally, in the last couple of chapters, I find out that Aurora is twelve. And that…is kind of a significant difference (though it does explain a really odd scene with a potential love interest who plans to court her when she grows up) It’s possible the age was said earlier and I missed it…

Despite some reservations, I did have fun reading this book!  If you know a middle grade reader who’s the right target age, I’d highly recommend it because I doubt I would have seen anything lacking at that age. If you’re older, I’d recommend it with some reservations. And regardless of your age, keep in mind that Aurora is younger than the cover shows!

Other reviews:
There’s a Book
Bookalicious
Creative Madness Mama
Anyone else?