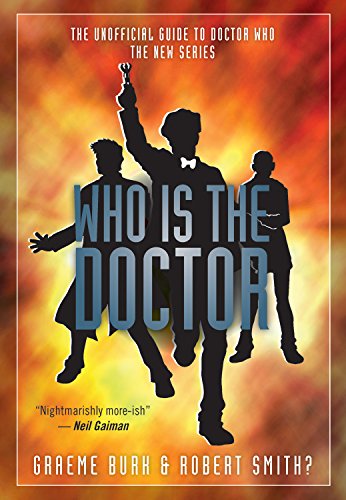 I may have reached a new geek achievement by reading Who Is The Doctor? by Graeme Burns and Robert Smith? [sic – I don’t get the question mark in his name at all]. Billed as the “unofficial guide to Doctor Who: The New Series” it’s an exhaustive look at each episode of the first six seasons (series, for the Brits) of Doctor Who.

First of all, there is no point in reading this unless you’ve seen the episodes. As River Song would say: spoilers! And also, I can’t imagine this would be very interesting. 🙂 This isn’t a collection of essays about the themes of the show, the development of characters, behind-the-scenes stories, etc, which might be of interest to a fan who had seen some of the show, or was simply interested in the show in general. Instead, it’s a (sometimes overly) detailed discussion of each individual episode, with mini-essays on each episode…so it does end up covering most of the above, just in a way that’s probably much better if you know what episodes they’re talking about.

Each episode is given a series of notes following the same formula. First, a very brief plot summary. Next, notes on how the episode connects to the larger entertainment world (“Roots and References”) and how it connects with other episodes of Doctor Who (Classic included). Both of these seem like good ideas, but in practice they were a little too exhaustive for my taste. I’d like to know when the Doctor quotes some other TV show or classic novel; I don’t need to know when a theme or concept vaguely resembles an earlier movie. The connections to earlier Who were better, although the easter egg-type connections got a little buried by the lists of really obvious connections too.

These are followed by a comment on how each season’s overarching story is embedded in each episode—which can be best explained by calling it the Bad Wolf Effect, which will make sense to Who viewers. 🙂 This was more fun, pointing out little hints and touches that could easily sneak past viewers, especially watching for the first time.

Next are brief notes on the Doctor’s character at this stage, and on the relationship between the Doctor and that season’s companion. I thought there were some good insights here, especially about the Doctor and especially Christopher Eccleston, although both of these topics were covered much more extensively in longer essays (below).

The Monster of the Week section felt largely superfluous because it doesn’t give any real depth of information. I liked the Stand Up and Cheer section a lot, highlighting favorite moments from each episodes. By contrast, that section is followed by Roll Your Eyes and You’re Not Making Any Sense, which often came across as awfully picky and complaining (and not things I want to know!) Yes, some things are so ridiculous or so illogical that they deserve to be called out (and I’ve done enough of that too!) But compared to the authors here, I’m a lot more willing to roll with some things or suspend disbelief on others, and I don’t really want problems pointed out to me.  (And there were some problems I saw that they didn’t call out anyway…)

But after those two sections we get Interesting Trivia, which was one of my favorites because it really is interesting trivia—backstory or connections to old Who or details on historical accuracy (or lack of it). There’s more depth here than we get in the sections above, and the focus really is narrowed to what’s actually interesting.

This is followed by a largely superfluous note on the episode’s time period, and then we round up with an essay from each co-author discussing the merits and flaws of each episode. This is the meat of the thing, and for the most part I liked the insights and reflections. Both authors comment on and enjoy the sheer fun of a lot of Who, but also get into more critical discussions about meaning, themes and all those good deep questions!  Most of what they say seems like it would add to the viewing experience, by exploring character arcs or pointing up themes that could slide past a casual viewer.

Burk and Smith? offer slightly different reflections but they do fundamentally agree with each other most of the time—which seems like a somewhat missed opportunity. If you’re going to offer two points of view, give us two different points of view.  There was more disagreeing during the last third (or, the Moffet/Matt Smith section) of the book, and I really enjoyed the varied insights those disagreements provided.

I myself disagreed with both authors every so often, but that’s inevitable.  I was willing to keep reading through the effusions about the 11th Doctor, and to put up with the (only occasional) digs at the 10th.  The only time any opinion in here actually made me angry was when Smith? asserted that “Rory knows he’s scored significantly above his level with Amy, so he knows he needs to take her on her own terms.”  Which in context of the comment means, not raising an annoying fuss when Amy runs off with another man the night before her wedding to Rory, kisses said-other man, and essentially refuses to choose between the two of them for several episodes.  So…you’re saying Rory should just put up with his fiancee emotionally cheating on him because he was lucky to get such a pretty girl at all?  Really?  Possibly it’s meant to be an observation, not necessarily approving, but that’s splitting hairs about an assertion that’s screwed-up in so many ways.  I could go on ranting, but instead I’ll just refer you to this beautiful clip of Amy talking about Rory (…after she’s figured her relationship out), which Smith? clearly missed.

One angry-making comment aside, I had a lot of fun with this book.  It definitely is only a book for the very hardcore fan…but I found that it offered some interesting details and insights into the show. And perhaps I’m most impressed by the sheer level of analysis the show can sustain. It affirms for me that Doctor Who really is something special.

But I can’t explain why Robert Smith? has a question mark at the end of his name.

Other reviews:
Once Upon a Bookshelf
Head Over Feels
Boomerocity
Anyone else?

Buy it here: Who Is the Doctor?

One thought on “Book Review: Who Is The Doctor?”