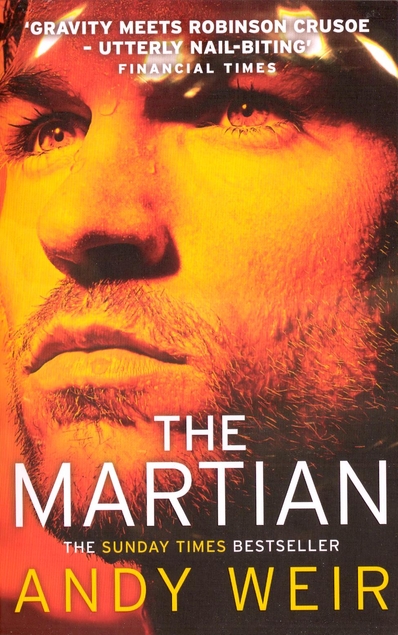 Digging through my pile of exciting books, one of the first I finished was The Martian by Andy Weir.  It was a good read–not as exciting as I hoped–but I can see how it could be a really great read…for someone else.  Someone with a bit more interest in science than I have!

Set in the near-future, the title character is Mark Watney, an American astronaut left behind on Mars when his team has to make an emergency evacuation.  The rest of the crew believes he’s already dead–but Watney survives, and now faces the challenge of surviving alone on Mars until the next schedules mission…four years away.  Luckily, most of the supplies for the mission were left behind, but it’s still a struggle for food, water and air.  Meanwhile on Earth, satellite images soon alert NASA to the mistake made, and the whole planet rallies around how to rescue the stranded astronaut.

In a lot of ways, this book reminds me of Hatchet, essentially the story of a castaway surviving alone.  That comparison feels like a helpful framework for addressing what I did and didn’t like about this book.

So, the science.  Brian in Hatchet had to figure out how to make fire, with a pretty detailed description of sparks and kindling.  Watney has to figure out how to make water, with a very detailed discussion on how to combine hydrogen and oxygen.  Huge swathes of the book focus at that level, with the detailed science of how Watney can achieve the basics for human survival.  I can easily imagine science geeks loving this.  I found it interesting to a point, but it was honestly a little heavy on the science discussion for me.

At the same time, possibly related, it was light on character.  The bulk of the book is Watney’s log entries, though some chapters deal with the reaction back on Earth.  For most of it, we’re with Watney, and yet I don’t feel like I got to know him the way I got to know Brian.  He’s a wise guy with an irreverent sense of humor (that’s abundantly obvious), but I didn’t get much more depth than that.

It’s ironic, really–when I was considering this book, my friend recommending it had to reassure me that it wouldn’t be super depressing (because–that premise!) and in the end…I think I’m disappointed that there wasn’t more angst and pathos.  Watney spends most of his time talking about what he’s doing, not what he’s feeling.  He cracks jokes, he complains about being bored, and he has an occasional tantrum (his word) in the face of a sudden crisis…but there’s not much in the way of other emotions.  Loneliness, existential fears, or even an appreciation for beauty on Mars tend to be one-off remarks, not threads pervading the story.  And while I didn’t want to read something really heavy…maybe just a little more weight?

This book does improve as it goes on–roughly the second half of the book (and maybe earlier, but I didn’t notice it) follows a pattern of progress then setback, resolution, progress then setback…and so on, which actually works quite well for drama and tension. Some setbacks are more dramatic and tense than others, but it did pull me in more to see how the newest disaster would be overcome.

Despite the multitude of science talk, this was still a fast read and I stayed engaged with it…but I was engaged on an intellectual level, not so much an emotional level.  I loved Hatchet and found The Martian interesting–but I like my sci fi to be characters with a touch of science.  If you like science with only a dash of characters, you might love The Martian.  I actually already recommended it to a friend at my writing group–we’re constantly telling him to put more character depth into his sci fi novel, so I’m thinking he’ll like this one!

Other reviews:
Contrary Thoughts
Falling Down the Book Hole
Reading for Sanity
A Dribble of Ink
Dear Author
Anyone else?

Buy it here: The Martian

2 thoughts on “The Martian by Andy Weir”