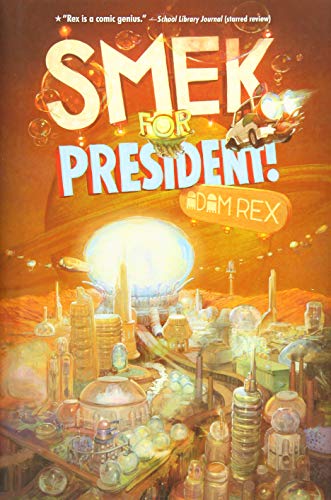 I reread The True Meaning of Smekday by Adam Rex recently, which is so delightful and funny and surprisingly meaningful.  It made me very excited to jump into the recently-published sequel, Smek for President.  Which was a bit less meaningful, but still funny and delightful.

The sequel picks up two years after the first book.  The world has settled back into normalcy after being invaded by aliens (twice) and Gratuity “Tip” Tucci is trying to get used to being a normal kid again, after being on her own for six months when her mother was abducted, and then saving the world.  J.Lo (the alien Boov, not the singer), who Tip met and befriended in the first book, is living with Tip and her mother but trying to cope with being the only alien left among all these humans.  Worse, the other Boovs blame J.Lo for accidentally summoning enemy aliens, who ultimately led to their loss of control over the Earth.

Tip and J.Lo set off together to the new Boov world, one of the moons of Saturn.  J.Lo wants to set his case before the great Boov leader Smek, and Tip wants to rebel against her mother.  They find the Boovs engaged in their first presidential election, and more interested in arresting J.Lo than in hearing his story.  Hijinks, naturally, ensue.

Like the first book, this was ridiculous and absurd, with so much wonderful humor.  I’m a little sad we didn’t go back to Happy Mouse Kingdom, but the Boov world is pretty wild and weird too, with its bubble buildings and technology that usually is as silly as it is functional.

I still love the characters–Tip is smart and tough and self-reliant, which is part of what gives her trouble here.  She chafes against her mother, who just wants to watch out for her, and goes on a growth arc realizing how much she keeps other people at a distance in defense.  J.Lo is adorably bumbling, almost always enthusiastic, and yet gets some more serious moments too.  The friendship between them is sweet and solid, but with some rough patches.

Most of the book is from Tip’s point of view, but we occasionally get segments from J.Lo’s perspective…in graphic novel form.  And how fun is that? 🙂  One of the more unique ways I’ve seen of distinguishing point of view…

This is a lighter volume than the first book, with its brilliant combination of humor and pathos.  This one is mostly just light humor, though we get more depth near the end.  It also has a more contrived plot (…not that the first one wasn’t absurd, but it made more internal sense).  For the most part, I’m willing to just run with it.  The first one is still my favorite for sure, but this second ride was a good time too.

And it wins extra geek points for having a Dalek on the cover.  Up there right below the movie ad. 🙂

Other reviews:
Wandering Librarians
And…I couldn’t find much else!  Though I trust that will change, as I did find posts from people anticipating reading it.  Let me know if you have a review up!

Buy it here: Smek for President

One thought on “Book Review: Smek for President”