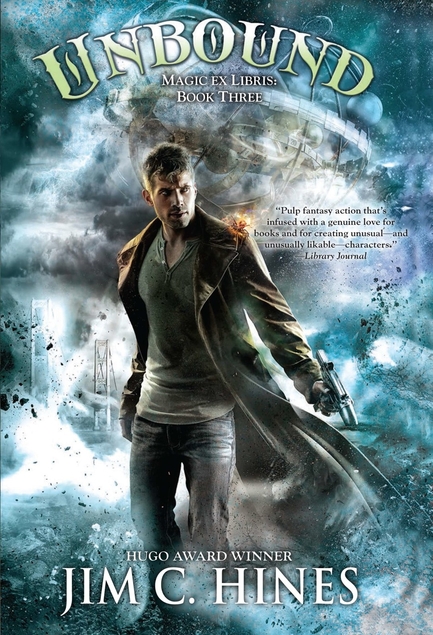 The series centers on Isaac, a libriomancer born with the ability to reach into books and bring out objects described in the text.  I discussed the magic system in more depth in my review of the first book, so suffice to say here that it’s possibly the coolest thing ever, not the least because Hines and I seem to have read many of the same books.  Isaac frequently reaches inside books I recognize or love, which adds a whole other meta-level of awesome.

I’ll try to avoid too many spoilers for the first two books in the series, but some are unavoidable to discuss the plot of Unbound…  The third book opens with Isaac thrown out of the Porters, a 500-years-old organization defending the world from magic.  He’s reeling from recent magical destruction to his hometown, and from having his own magic locked away by Johannes Gutenberg (still very much alive, and the founder of the Porters).  Isaac channels his depression and grief into an obsession with finding his missing student, Jeneta, believed to be abducted by a mysterious magical being who plans to, well, conquer the world.

The crises and threats throughout this series have been ramping up beautifully.  My one reservation in the first book was a slightly anticlimactic villain, and put into the larger arc, it all makes sense–the villains and dangers keep getting more complex and more intense.  The villain here is a thousand years old with an origin puzzle Isaac has to figure out, and the ability to manage feats of magic no one has seen before.  Including turning someone into a Gorgon or an angel, and raising a ghost army.

Isaac is struggling in this book, and it makes him a better character.  Not a fun person to be around, as he’s depressed, snapping at others and possibly genuinely unstable at times, but he’s fascinating to read about.  Remember I thought the balance of angst and humor was off in The Martian?  Hines nails it.  We get inside Isaac’s head and his emotional pain, but he never loses his ability to make a snide remark and lighten what could have been altogether too depressing.

Isaac also retains his ability to geek out about things. 🙂  I can’t tell you how much I love a character who faces off against Frankenstein’s Monster, while thinking that he’d really like to do an EEG scan, read the brain activity and figure out how the immune system was coping with all the foreign organs.  And I love a book where this even comes up!

Isaac is surrounded by strong supporting characters.  Lena, his dryad girlfriend with the ability to magically manipulate wood, continues to be completely badass, whether that’s making snide remarks, fighting hand-to-hand, or just basically taking no nonsense from anyone.  For those keeping score regarding literary diversity, Lena is gloriously not the traditional fantasy heroine in that area too.  There may be a white guy on the book cover, but he’s dating a heavyset, ethnically-vague bisexual woman who’s in a poly relationship with an Indian woman (who has a doctorate degree, to continue the trend of powerful female characters).

We see more varieties of magic in this installment of the series, which is pretty cool although it is a trade-off.  I feel like there was less libriomancy (reaching into books, I mean) since the focus was split.  Although there were still quite a few moments where I excitedly recognized a book–and I was thrilled when the villain rained Thread from Pern onto the heroes.  (Thrilled by the reference, not by the situation…you know!)

If I have a more serious reservation, it’s that the climax didn’t quite play right to me.  The trouble was that I didn’t understand what Isaac did until he explained it after the fact and that’s…not the most emotionally satisfying way to read the end of a fight.  However, that’s one false note in a really amazing and gush-worthy book!

Unbound happily does not leave us with a cliffhanger like the second book.  Without spoilers, I’ll just say the immediate threat is resolved–although we’re left with “a world that will never be the same,” so to speak.  I wasn’t actually sure if this was the end of the series or not–many things are tied up and the open threads are nebulous ones, which might really just be the sunset the characters are riding out towards.  So I hunted around on Hines’ website, and found that he is promising at least one more book!  Which, naturally, I already have on my “Waiting For” list.

Other reviews:
The Arched Doorway
On Starships and Dragonwings
Bibliophilic Witch
Anyone else?