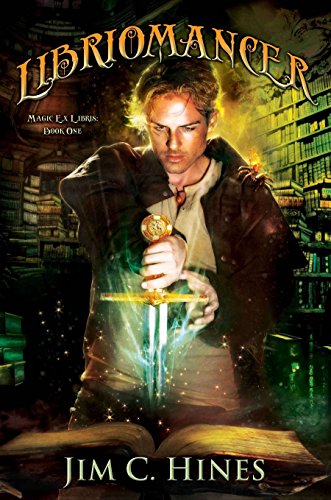 I don’t often finish a book and then start grabbing friends to tell them, “You must read this!”  But I have been having that experience with Libriomancer by Jim C. Hines.  Quick advisory that it’s not my usual YA, but for older readers it’s amazing!

This one has been on my To Be Read list for ages, and I don’t know how it took me so long to get to it.  It has one of the most brilliant premises ever.  The lead, Isaac, is a librarian–but he’s also a libriomancer, part of a secret organization of magicians.  Libriomancers can reach into books and pull out objects–like Excalibur, Lucy’s healing cordial or Tinkerbell’s fairy dust. Libriomancers use their powers to deal with magical threats, from natural magic creatures, or ones created from books (more on that in a bit).

Isaac has been relegated to fieldwork after he lost control on a mission, but when a pack of vampires (the “sparkler” variety) attack him in his library as part of a widespread vampire uprising, Isaac is forced back into the fray.  Isaac, his fire spider pet, and a dryad named Lena soon find themselves at the center of a threat much bigger and more complicated than a simple vampire attack.

So I mentioned the premise is brilliant, right?  The mere concept of pulling objects out of books is amazing, but Hines makes it even better with complex rules around how the magic works.  In some ways I could almost see him deliberately creating limitations, but they’re limitations that make sense. For instance, you can’t grab the One Ring of Power, because certain objects have been deemed too dangerous, and their books were magically locked.  You can’t write your own book with whatever object you need, because it’s the readers’ belief in the story that enables libriomancers to pull objects out–so it only works with widely-read books…and did I mention that Johannes Gutenberg founded the libriomancers’ order?  You can’t do too much magic too quickly, because characters start bleeding into the libriomancer’s mind.  With some of the rules come dangers, giving this rollicking ride some darker undertones and greater depth a well.

So–brilliant premise and plausible, complicated magic, check.  References galore to other books?  Check!  Isaac uses books in his magic, and Hines has mostly drawn from real books–he includes a helpful list at the end.  I recognized most of the books, and I think that will be the case for most readers who enjoy sci fi and fantasy too.  This is a firmly fantasy book, but Isaac deals in sci fi books a lot too, so there are ray guns, and one never-identified-but-unmistakable lightsaber.

References in themselves are great, but Hines manages some hugely entertaining, tongue-in-cheek references.  Remember that mention of “sparklers”?  Many vampires came about because someone accidentally reached into a vampire book at the wrong moment and became infected.  So there are a variety of vampires classed according to what book they spawned from–like Sanguinarius Meyerii vampires, irritatingly superhuman and nicknamed sparkers, or the more traditional Stokerus vampires.  So.  Much.  Fun!

The danger of a really brilliant premise is how disappointing it is when a book falls down some other way.  Fortunately, that’s not the case here.  Isaac is a likable hero, flawed but honorable and well-meaning.  He struggles with some interesting, magical morality questions in a way that made me quite like him.

Lena, as I would expect from the author of The Princess Novels, is tough, take-charge, and very much an equal participant in the adventure.  As a dryad, she has some amazing wooden weapons she can use in very clever ways.  She’s also very much out of the mold of typical characters, considering she’s heavyset and bisexual, two ideas that don’t appear much in fantasy.  Lena has a very complex arc that I won’t try to unpack here, exploring questions of free will, character stereotypes, and power in relationships.  It’s carefully and powerfully handled.

If the book falters at all, it’s that I was just a smidge disappointed by the ultimate reveal on the villain.  Trying not to give spoilers, but essentially I expected the big bad villain to be, well, bigger and badder.  However, this is the first book in a trilogy, so I am optimistic that the threat level will rise with each book, and there were definite hints of something more dangerous lurking.

And the up-side to waiting so long to read this…I can go straight on to Book Two!

Don’t forget you can enter the KidLit Giveaway and win a signed copy of my novel!  Contest ends May 18th so enter now…

Other reviews:
Making It Up As I Go
The Book Smugglers
Little Red Reviewer
Anyone else?

6 thoughts on “Reaching Into Books”