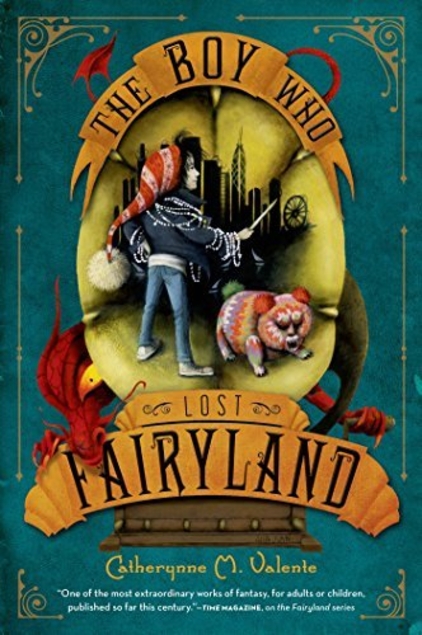 I have been waiting (and waiting…) for the fourth book in Catherynne Valente’s Fairyland series for over a year now–and it’s been my most anticipated book all that time.  So I am very happy to say that The Boy Who Lost Fairyland was delightful.  Not at all what I would have imagined for Fairyland 4!  But delightful.

I reread The Girl Who Soared Over Fairyland in February, anticipating this one’s release, and that was a delight too.  The books in this series are packed so thick with wit and wisdom and whimsy that I knew I wasn’t taking it all in on a first read.  This is a rare book that was even better on a reread–and I also could be more patient waiting for some beloved supporting characters to turn up halfway through the book.

Patience may be a virtue needed for The Boy Who Lost Fairyland too.  Instead of returning to our heroine September and her dreadful plight from the last book, we instead find the story of Hawthorn, a troll abducted by the Red Wind and sent off as a changeling to the mysterious, mystical land of Chicago.  Although Hawthorne forgets his trollish past and believes himself to be Thomas, human boy, he’s still Not Normal, neither at home nor in the perilous realm of Public School 348.

Never fear, our charming narrator interrupts with an interlude after Chapter Two, to assure us that she knows we’re wondering about September, to beg patience and to invite us to “journey off the main road for a bit…[to] find a path through the snow to those little pockets of story which happen while the Hero is off doing other things.”  And how could I resist an invitation like that?

I may as well warn you right now that September herself (and her friends) doesn’t come back until the very end of the book, in little more than a cameo.  And there is, alas, another cliffhanger.  But that wander down another path still made for a wonderful book.

The Boy Who Lost Fairyland is just as filled with wit and wisdom and whimsy as its three predecessors, and maybe even a little bit funnier.  Through the eyes of Hawthorn/Thomas, we see our familiar world told through the language of Fairyland, casting a sheen of magic over the most mundane of objects.  A sharpened pencil becomes a magic sword, a toothbrush an Ivory Knight, and a thick coat can only be a Troll’s Mantle.  There’s humor and wit and also makes one think about the wonders of the “ordinary” world that we’re so used to, we don’t see them anymore.

Thomas is brimful of imagination and drama, desperate for adventures, and has no idea how to be Normal–and knows he isn’t Normal, and tries very hard to understand the rules of this baffling world.  He may be a troll trying to be human, but what a very human experience!

My other favorite new character here is Blunderbuss the Wombat, who is brash and rude and unapologetic, very loyal and very confident.  She is, come to think of it, extraordinarily unlike September’s friends, A-through-L who is often bashful, and Saturday who is quiet and shy.  But Thomas is different from September, not thinking quite as deeply or taking charge quite as readily.

Rather like Peter Pan, I think my true favorite character in this series may be the Narrator.  And though most characters and even most settings are new in this book, the Narrator is still the same, with her clever metaphors and turns of phrase and something to make me think “what a lovely thought/idea/sentence” on almost every page.

So while I have no idea where the Narrator will decide to take us in the final book, The Girl Who Raced Fairyland All the Way Home, I’ll happily follow whatever path she presents…even if (especially?) Here Be Dragons!

Other reviews:
Alice Marvels
On Starships and Dragonwings
Consumed by Books
Anyone else?

Buy it here: The Boy Who Lost Fairyland

One thought on “Book Review: The Boy Who Lost Fairyland”