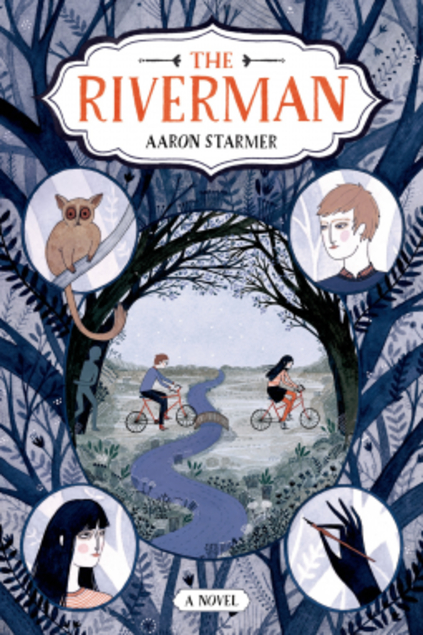 I recently read The Riverman by Aaron Starmer, an intriguing story that plays with the question of whether it is, or isn’t, a fantasy novel. I liked the book a lot, hated the ending—and feel better after discovering that there will be a sequel. Which, conveniently, is out in mid-March!

Twelve-year-old Alistair is baffled but intrigued when neighbor girl Fiona asks him to write her biography. Fiona has always been a bit odd, but she unfolds an impossible story about her journeys to Aquavania, a world made of water where she has the power to create anything with her thoughts. Many others go to Aquavania too, but children are disappearing, victims of the mysterious Riverman. Despite his growing feelings for Fiona, Alistair doesn’t believe the story, and searches for another explanation, sure that this must be an elaborate cry for help in response to a real-life threat Fiona is facing.

Most of the book is fascinatingly ambiguous. With Alistair as our narrator, we only know what he knows, and when he doesn’t know if Fiona is telling the truth, the reader can’t know either. I really enjoyed that element of mystery, and for most of the story I could have seen it going either way—either a fantasy story, or a darker story about a very troubled girl.

Alistair serves as an interesting narrator, mostly telling a story about someone who is far more colorful than he is. He doesn’t fit into any easy stereotype of YA characters (jock, outcast, brain, etc.) Similarly he doesn’t seem to fit into any group at school, but isn’t so far apart as to be ostracized either. His vague ordinariness may be a large part of why he’s so drawn to Fiona—she chose him, and thinks he’s special. As the story develops, Alistair begins to get a bit of a hero complex, determined to unravel Fiona’s mystery and rescue her from danger. (Now that I know there’s a sequel, I’m curious to see how that eventually turns out…)

Despite Alistair trying to cast himself as hero, Fiona really isn’t a damsel in distress. She’s smart and creative—either creating a magical story or a magical world, depending on which way that tips. There is a clear undercurrent of sadness and fear to Fiona, with the question only whether she fears a magical villain or a real-world danger.

The cover and the age of the main characters make this seem like it should be Middle Grade, but I’d classify it as Young Adult. Most of the darker elements are not overt, but there are a lot of dark themes around child abuse—and there is one on-camera dead body, and a character who loses fingers in an accident with fireworks. Nothing is gratuitous, but it makes this a more mature book.

Tension picks up as the book goes on and I got very engaged with the last quarter or so, anxious to see how the mysteries would be resolved…which is why I hated the ending. After such an ambiguous premise, I was expecting there might be an ambiguous ending, but I wanted some resolution. Instead, I was shocked to turn a page and find the Acknowledgements. No answers! Well, a few, but not many. This makes a lot more sense in light of a coming sequel…though to be honest, I still wish this volume had given us a little more resolution!

Oh well…but there had better be more answers in that next one!

Buy it here: The Riverman

One thought on “Book Review: The Riverman”