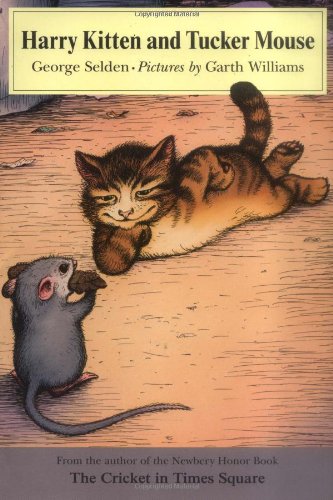 As far as I know, my book today is pretty obscure–but you may have heard of its more famous literary sibling, The Cricket in Times Square.  George Selden wrote seven books about Chester Cricket and his friends, and Harry Kitten and Tucker Mouse serves as a prequel to Cricket.

The book opens with a very young Tucker Mouse lost on the streets of New York–so young that he hasn’t even chosen a name for himself yet.  When he bumps into a tabby kitten, he’s ready to fight…because that’s what cats and mice do.  But Harry Kitten offers him a crust of sandwich instead, and the two become fast friends.  Together, they roam New York looking for a home, from the basement of the Empire State Building to manicured Gramercy Park.  But nowhere feels right until they find the bustle of the Times Square Subway Station.

This is an utterly charming series.  Chester Cricket doesn’t appear in this story, but I love Harry and Tucker.  Harry is always so calm, so reasonable, while Tucker is dramatic, anxious and avaricious–and usually the source of humor.  They’re one of my favorite literary friendships, all the more so because it’s between two traditional enemy species.  And their quest for a place to belong is perfectly familiar for humans too.

This is really a novella, only 80 pages and heavily illustrated.  The illustrations are by Garth Williams (of Charlotte’s Web illustration fame) and are hugely fun.  Harry Kitten especially is so adorable.  He looks so soft and furry, I just want to squeeze him!  And the drawings of Tucker are wonderfully expressive and often very funny.

My only criticism is in one patch of the illustrations–Tucker and Harry encounter some rats, and they’re depicted wearing clothes.  Which totally doesn’t fit the concept of the world, where animals are intelligent and talk to each other…but are still animals, and go entirely unnoticed by humans.  So that was weird.  But apart from that, the illustrations hugely add to the story.

And the story is sweet and fun, about two friends looking for a home.  And what’s not to love about that? 🙂  Highly recommended, whether you’ve read the rest of the series or not.

Other reviews:
Um…this really is obscure apparently, because I couldn’t find any!  Sad…it’s such a lovely book.