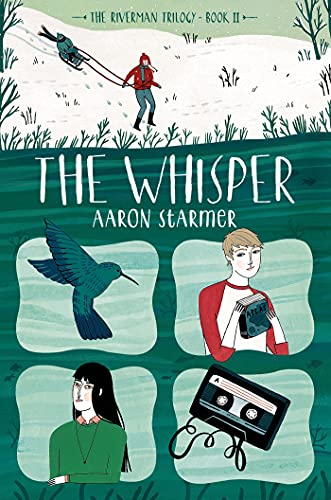 I recently reviewed The Riverman by Aaron Starmer, which left me with a very disappointingly ambiguous ending.  So naturally I went swiftly on to the recently-published second book, The Whisper.  I liked the ending better…but had mixed feelings about the book on the whole.  Spoilers to follow for the first book because it’s pretty unavoidable!

The Riverman was about Alistair and his friendship with Fiona, who tells him a strange and impossible story of traveling to Aquavania, where kids can create entire worlds with just their imaginations.  Alistair mostly believes that Fiona is inventing an elaborate metaphor, including the shadowy Riverman who stalks Aquavania, in response to dangers threatening her in the real world.  The Whisper blows apart that uncertainty between fantasy and reality, when Alistair follows Fiona into Aquavania.  Fiona has been taken by the Riverman, also called the Whisper.  Alistair chases through worlds, trying to find and fight the Whisper, hoping to find and rescue Fiona in the process.

After reading two books, I’m betting this is going to be an amazing trilogy…when all three books are out.  The first two have great things in them, but neither one stands alone very well.  The first had me wildly frustrated with the ending, and the second one felt like it was all middle.  Alistair essentially spends the entire book chasing the Whisper.  There are exciting adventures along the way and it was fun to read…but it was a lot of running without clear forward movement.  There is finally a confrontation–which left a cliffhanger.  But somehow that was more satisfying than the previous book’s ending!  I mean, a cliffhanger ending is an ending, and that felt better than just a complete non-ending.  And this ending did suggest a fascinating new direction for the next book.

The Whisper is much more magical than the previous book, since it’s set (almost) entirely in Aquavania.  Alistair sees many different magical worlds which are weird and interesting…and also give rise to some very strange philosophical questions.  Do imaginary friends have souls and consciousness?  How about when they live independently for generations?  It’s kind of like questions about the holodeck characters on Star Trek, only amplified.

The Aquavania chapters are interspersed with memories from Alistair’s childhood, and I think I actually preferred those.  The magical landscapes are interesting, but the memories get into the characters much more, and I liked those insights and developments.

I’m not sure when the final book in the trilogy will be out (next year?) but I want to read it.  Even though I haven’t loved either of the first two, there’s been cool things in them–and I really want to see if the third book finally completes the story and makes something greater than the sum of its parts!

Other reviews:
Charlotte’s Library
GeekMom
On Starships and Dragonwings
Anyone else?

Buy it here: The Whisper (The Riverman Trilogy)