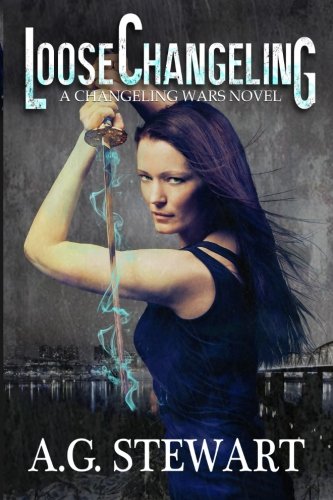 How can you lose with this premise?  Nicole always thought she was normal, until she catches her husband in bed with another woman, and in a fit of anger–turns the other woman into a mouse.  And that’s only the beginning of Loose Changeling by A. G. Stewart.  So, a disclaimer: I’m friends with the author, a member of my writing group.  But that really just means that I have a fuller appreciation for what an amazing writer she is!

So after the mouse incident, Nicole finds out that she’s a Changeling, a member of the Fey raised by humans–the only Changeling, since Changelings were banned more than a thousand years ago.  Nicole is plunged into Fey politics, a lot of monsters want to kill her, she can only use her magic when her soon-to-be-ex husband is in the room to make her angry enough, and her only guide through it all is a Fey bodyguard who is distractingly attractive and, even more problematic, keeps getting caught in lie after omission after half-truth.  All she really wants to do is go back to her desk job, where all her office supplies are perfectly lined up and the world makes sense.

This is a fast-paced, exciting book with a lot of twists that held my interest with never a falter.  There are some exciting battles and confrontations, but the book is just as engaging when Nicole is learning magical abilities or trying to process the emotional roller coaster she’s going through.  It’s a nice balance of action, character development and, as I always appreciate, dots of humor here and there too.

Nicole is a great character, someone who has no interest in magic or saving the world suddenly thrust into an insane situation.  She’s a workaholic who likes order, and I have to love a heroine who’s upset because dead hobgoblins are staining her carpet (to be honest…I would have that thought).  It’s fun to see an older heroine (32) who’s coming into her magical role, rather than the usual 16-year-old Chosen One (or maybe I just read a lot of YA?  Could be).

Nicole is the major character here, but the other characters, even some of them small, have wonderful depth and complexity.  Kailen, that distracting, dishonest Fey bodyguard, is much more than a brooding, seductive warrior.  He’s that too, but he has his own story, his own motivations and a surprising lot to make him sympathetic.  At one point, Nicole gets an insight into Kailen that she describes as “the saddest thing she’d ever seen,” and it’s so true.

Even Owen, the philandering husband, ends up being a more complex character, more gray than straight black sleazy.  We also meet Nicole’s family–human and Fey, and I feel like I got to know each of those characters and something about the way they tick, even for being pretty small figures in the book.

So, we have an exciting plot, solid characters and really excellent writing.  There’s also a pretty cool magic system/magical worldbuilding going on, just to put icing on this.  This is the first book in a planned series, and the introduction of a snarky new companion for Nicole near the end of this book is making me excited for book two.  This book ends in a satisfying conclusion, though, so you don’t have to worry about an agonizing cliffhanger while you wait for the next one.

In sum: read it.  I’ve already started talking it up to people I know in-person, and despite all the reviews happening here, I don’t actually do that very often. 🙂

Other reviews:
JC’s Book Haven
For the Love of Fictional Worlds
Anyone else?