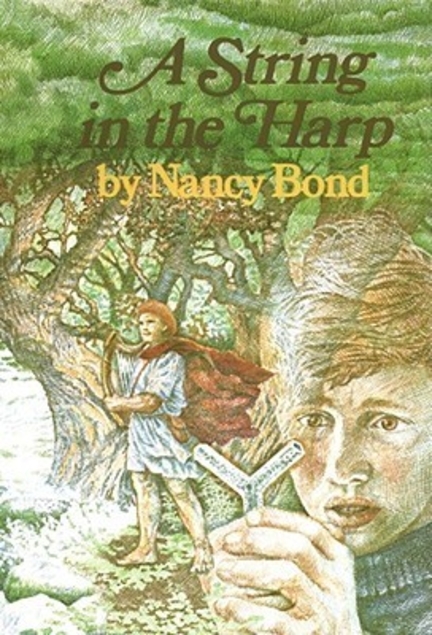 A String in the Harp by Nancy Bond was a rare case where I bought a book unread—unheard of, in fact, before finding it on the shelf. But it was at my library’s warehouse sale, and either I got it in a brown bag with a lot of other books, or I bought it for a dollar—I can’t remember anymore—so I was willing to risk it. The Newbery Honor medal and the Welsh setting seemed like good signs. And happily, it turned out to be well-worth the price!

The story is about an American family spending a year in Wales. Coping with their mother’s recent death, all three children—15 year old Jen, 10 year old Peter and 8 year old Becky—are all grieving in their own ways. Their father has retreated into his work, and Peter in particular is withdrawing from the family, angry and rebellious and fiercely hating this cold country his father took them to. Then Peter finds an ancient harp key, and through it begins to have visions of the ancient bard Taliesen, exploring Welsh history through his life. It’s not immediately clear whether this magic will draw Peter back towards his family, or only farther away.

This book had me engaged at the first glimpse of Wales—and the odd part is, I have no idea why! I’ve never been to Wales (apart from one train ride to and from the Doctor Who Experience, which doesn’t really count), I’ve never been especially interested in Wales, and the characters, initially, hate the place! And yet somehow, I immediately felt an incredible wistfulness for Wales.

That makes more sense as the story goes on, as the characters explore and grow to appreciate the rugged beauty of the countryside—and, of course, as Peter explores the history too. Wales, in a way, becomes a major character in the book. Plot-driven and character-driven books are pretty usual, but this may be a setting­-driven book—and that works better than I would have expected!

There’s strong character focus too, as the children grieve and heal and find their way back to each other and to their father. Peter especially grows, as he was struggling and withdrawing the most at first, disappears (mentally) into the world of the harp key, then finally comes back into the fold of his family.

This was an unusual brand of time travel. No one exactly travels, but the past and the present begin overlapping. First Peter has visions of the past, and then other people begin seeing past figures too, at least one of which seems very definitely to be in the present. There’s no real indication that any changes are made in the past—or that the past leaking into the present has any direct effect. The impact is all on the character level, as people are changed by what they experience. While that sounds somewhat passive, I actually liked the handling quite a bit.

Maybe what really counts here is depth. Not a whole lot actually happens on a surface level, but the characters are explored with such depth, and the setting (both culturally and landscape-wise) is so deeply explored that it’s still an engaging, satisfying read.

Hopefully you would find it that way too—although I can’t promise you’ll feel a great wistfulness for Wales, since I still can’t quite explain that!

Other reviews:
Things Mean a Lot
Charlotte’s Library
Bonnie’s Books
Anyone else?

Buy it here: A String in the Harp

4 thoughts on “Book Review: A String in the Harp”