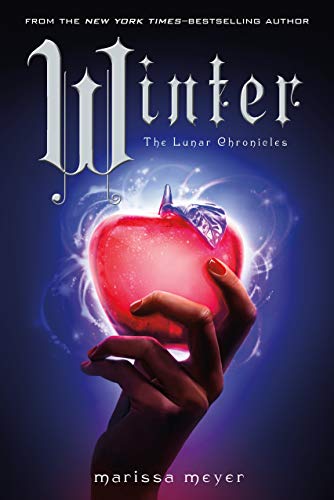 I’ve been eagerly awaiting the final book in Marissa Meyer’s Lunar Chronicles ever since May, 2014…when I read the previous book!  Happily, Winter did not disappoint in the slightest.

The story has grown complicated and the cast has grown large by this fourth book…catch up on my earlier reviews of Cinder, Scarlet, Cress (and Fairest, a prequel).  Spoilers to follow for the earlier books!

In a more-or-less distant future, Earth is on the brink of war with Luna, whose wicked Queen Levana is bent on world-domination, and she has an army of mutant soldiers, a plague virus and some nasty mind-control to back her up.  The one hope is Cinder and her rag-tag collection of allies.  Cinder is both the long-lost heir to the Lunar throne and a cyborg…who once left her mechanical foot behind at a ball.  Her allies include Scarlet, a pilot with a fondness for a red hoodie sweater and a certain Lunar soldier named Wolf; Cress, a brilliant but naive hacker who was held captive in a satellite by Levana until rescued by Cinder and co.; Carswell Thorne, a dashing captain who will tell you just how wonderful he is…while secretly doubting that he’s as good as Cress thinks he is; and Emperor Kai, who was abducted in Book Three but isn’t very sorry about it, considering he and Cinder have a romance that is (slowly) heating up.

Book Three also saw Scarlet carried off to captivity on Luna, but she’s fallen under the (doubtfully effective) protection of mad Princess Winter, and by extension her one loyal guard, Jacin.  The only chance of rescuing Scarlet, defeating Levana and reclaiming the Lunar throne is for Cinder and co. to somehow make it to Luna, probably under cover of plans for the royal wedding between Kai and Levana.

Are we all caught up now?  🙂  It’s a complicated plot…and the book is over 800 pages!  There’s lots of room in there for skirmishes, strategies, setbacks…and other S words.  Also battles and tragedies, but romance and humor too.  Both in plot and in romance this was gripping and suspenseful.  I felt pretty sure it would all work out in the end, with good triumphing and love winning the day, but that didn’t prevent a lot of anxious moments along the way.

I loved all these characters so much.  We kept adding new major characters with each book, making for a lot to juggle by this point, but it was all done very deftly.  There were some very nice (and very nerve-wracking!) moments with Scarlet and Wolf, and I loved watching Cress grow more confident and more savvy…without losing her charm and innocent delight in the world.  She and Thorne are especially fun, and my favorite romantic couple of the year!

Cinder also had a lot to deal with in this book, coming to terms with her identity and her role…and does so much more satisfyingly than a certain other “face of a revolution” heroine I could name (yes, I’m looking at you, Katniss!)  Cinder has never been my favorite heroine in this series, although I’m not sure why–maybe she’s a little less quirky and individual than the others, or maybe I’m just not as interested in Kai, her romantic interest, who’s a pretty solid, standard handsome prince (with some uncertainties, yes, but nothing extreme).  But for what it’s worth, lots of people like Cinder best, so don’t take my word for it!

And speaking of quirky characters…I loved Winter.  She is, of course, Snow White, the Queen’s hated stepdaughter who threatens to be more beautiful than her stepmother.  It’s all the worse because Winter’s beauty is natural, unlike Levana’s mind-control glamour.  Winter believes it’s wrong to manipulate others’ minds and has refused to use her Lunar gift since she was twelve…and has gone slowly mad as a consequence, subject to strange and terrifying visions.  Meyer does a lovely job writing a somewhat unhinged character–the madness doesn’t obscure Winter’s sweet and compassionate personality, but is also a part of her.  In some of her more fanciful moments, it’s hard to know what is madness and what isn’t.  I also love that Winter is genuinely very sweet–but has an absolute iron core of strength too.  The two aren’t mutually exclusive.

I really enjoyed the relationship between Winter and Jacin too, her loyal guard and friend from childhood.  They’re close friends who can’t dare to be more–even though they both want that.  I love that we get to see Jacin from Winter’s point of view, from inside his own head, and from other viewpoints, because he’s so different in every case.  Layers–so many layers, and so fascinating.

So it’s a good thing there’s a collection of short stories coming out in February!  I am, of course, looking forward to it.  But in the meantime, I highly recommend this wonderful series.  Science fiction, fairy tales retold, wonderful characters, and satisfying with every book.  Go on.  Read it.  🙂

Other reviews:
Katie’s Book Blog
Reading with Jenna
The Book Addict’s Guide
Anyone else?