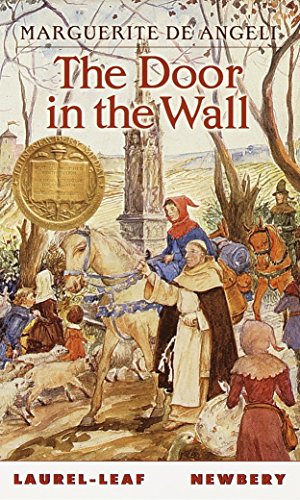 I picked out The Door in the Wall by Marguerite de Angeli from the list of Newbery Medal winners because I wasn’t sure if I had read it before or not. It turns out the answer is no, as all I could remember of the book I thought it might be was that it involved canal boats—which don’t appear here at all. But now I have another one to check off my list!

The door of the title is much more symbolic than literal—when life presents a wall, keep looking until you find a door. Ten-year-old Robin is facing a wall with a vengeance. The son of a knight during the reign of Richard II, Robin was always meant to follow his father’s footsteps—until he’s struck by an illness that leaves him unable to use his legs. His father is on campaign, his mother is away with the queen and so Robin is taken in by the nearby religious order.  He’s cared for by Brother Luke who also offers philosophy about doors and walls. Robin eventually goes to a new guardian, a friend of his father’s, but still must find his proper role in his changed life.

This is a rather charming picture of medieval England…which is both the strength and the weakness of the book. Because it’s pleasant to read, and I like charming books. But I strongly suspect that the Middle Ages were not actually a charming time period, especially if you had the misfortune to be crippled!

Robin goes through a certain amount of worry and existential unease because of his uncertain future and his new limitations. But on the whole, everyone he meets is very reassuring and friendly, and he adjusts with rather a minimum of trouble. And I like books about nice people…but at the same time, I just don’t believe it would have been that way.

I’m sure some would argue that this is a kid’s book and that’s why it doesn’t get into deeper or darker issues…to which I respond: Alchemy and Meggy Swann by Karen Cushman. Set during Queen Elizabeth’s reign (so a little later, but not too far), Meggy also walks on crutches, and has not found the world to be a friendly, encouraging place. But Karen Cushman (also a Newbery Medal winner) is especially good at historical fiction for kids, with the fleas and prejudices and classism included.  The Door in the Wall was written in 1950, and that may be a factor.

So…this was charming and pleasant and not a bad read. But it wasn’t much like Medieval England either!

Other reviews:
HubPages
Anyone else?

Buy it here: The Door in the Wall

2 thoughts on “Book Review: The Door in the Wall”