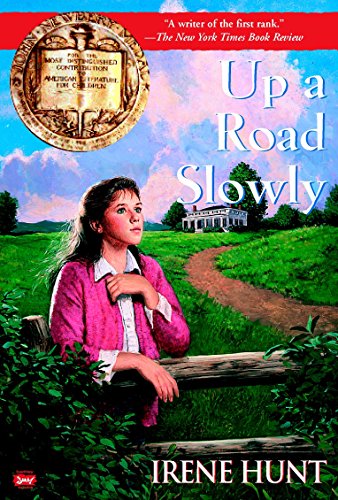 Scanning through the Newbery Medal titles, I liked the sound of Up a Road Slowly by Irene Hunt. In fact, it sounded rather like an L.M. Montgomery book. Which may not have been the best thing in the world after all.

The broad strokes are very recognizable—a young motherless girl is sent off to live in the country with an austere maiden aunt. There is initial conflict between them, but they gradually grow to understand and love each other. Against a backdrop of small school day dramas and eccentric relatives, the girl grows into young womanhood, chooses the right beau, and achieves artistic fulfillment.

All well and good. And Up a Road Slowly was a perfectly fine story…but it wasn’t L. M. Montgomery. Julie was just no Emily or Anne. Late in the book she discovers a writing talent, but it’s not at all like Emily’s long-held and worked-for dreams. Julie’s Aunt Cordelia, with her tragic love story, and Uncle Haskell, with his grandiose and unfounded sense of self-worth, were more colorful and interesting characters. But nothing here ever really grabbed my heart.

Irene Hunt wrote Across Five Aprils too, and that book gave me the sense of always skimming somewhere along the surface. I had the same problem here. Despite what the title might suggest, there was a lot of moving rapidly over the years—10 years in 200 pages.

There were fully-fleshed scenes, but everything still felt rather vague and nondescript and not really down into the story or the characters. I’m not sure where or even when the book is set—somewhere in the United States, somewhere in the first half of the 20th century, but if there’s a world war or a Great Depression going on, I can’t tell. (L. M. Montgomery’s books are [nearly] always on Prince Edward Island, in a good imitation of Cavendish—though I’ll admit the year is often more nebulous.) The lyrical nature descriptions are just not here either.

This sounds more critical than I intended to be, because it was a decent book…but no Montgomery novel and I’m not sure I fathom the Newbery award either! A decent book, but just not that good.

Other reviews:
Allison’s Book Bag
The Newbery Project
Bookin’ It
Anyone else?

Buy it here: Up a Road Slowly

One thought on “Book Review: Up a Road Slowly”