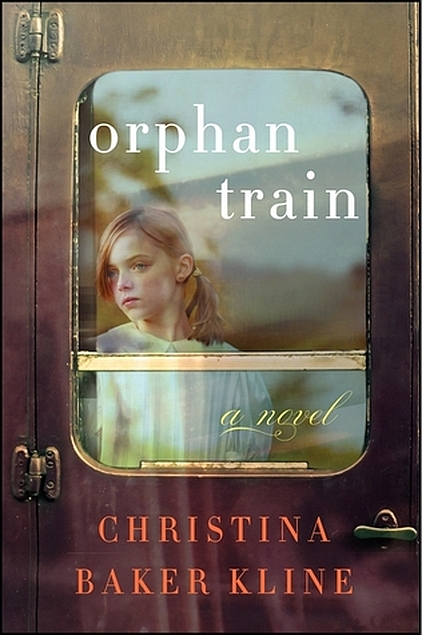 I love it when a book I picked up on impulse turns out to be excellent.  I stumbled across Orphan Train by Christina Baker Kline in my library’s audiobook section and it turned out to be a gem.

The story begins with Molly Ayer, seventeen and about to age out of the foster home system.  She’s bounced from home to home for years, rootless and trusting no one.  Enforced community service brings her together with Vivian Daly, a wealthy, elderly woman who needs her enormous attic cleaned.  But the attic holds all the memories of Vivian’s life, of when she was a nine-year-old orphan in the 1920s, sent west on an orphan train to find a new family.

The book is in alternating storylines, with the bulk of it on Vivian’s memories–or rather, Irish-born Niamh, who acquired new names as she was taken into different families.  Niamh’s story is frequently heart-breaking, as she bounces from adult to adult who won’t or can’t take care of her.  She encounters terrible callousness, occasional brutality, and a few sparks of kindness.  Her perseverance and will to survive is powerful.  For all the bleakness, she does eventually find safety, if not a fairy tale ending.

I loved the way Molly and Niamh/Vivian’s stories are paired.  On a surface level, they’re both orphans who passed from family to family.  On a deeper level, that has caused them both to struggle with trust and relationships.  In Vivian we see how her tragedies and her fears caused her to accept a life that, while not unhappy, was not all that it could have been.  The much younger Molly still has a chance to learn and grow and seek something different for herself–although there is a nice piece at the end suggesting that it’s not too late for Vivian to find new meaning either.

This book also goes to my diversity challenge, and pairs Molly and Niamh in a really interesting way on that level too.  Molly is half Penobscot Indian, living with and among white people.  Her cultural heritage is a source of strength for her, but also sometimes conflict, as in a powerful classroom discussion.

Niamh also experienced prejudice and marginalization when she was young, when the cultural situation was very different for the Irish.  With her Irish brogue and red hair, Niamh can’t hide her heritage any more than people today can hide the color of their skin.  She’s told more than once that she’ll be hard to adopt out because of her hair color, and her name is quickly dismissed and replaced by something more “acceptable.” There’s something powerful and sad about the reminder that racism is a long, long problem, though sometimes it changes its face.

Speaking of faces–I can’t explain the cover image, which does not in any way resemble either redheaded Niamhe or Native-American Molly.  Maybe the little blond girl’s hair is a little red-tinged…?  I actually can explain it as an unfortunate example of whitewashing, although I can’t imagine why anyone would resist putting a redhead on a book today.

Fortunately, the book is better than its cover!  This is an often sad book, but excellent and ultimately hopeful.  Recommended!

Other reviews:
Beth’s Book-Nook Blog
The Whimsy Bookworm
Luv to Read
Anyone else?