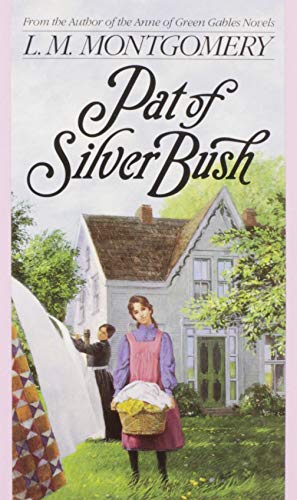 I’ve been gradually revisiting L. M. Montgomery’s novels lately, most recently her Pat duology: Pat of Silver Bush and Mistress Pat.  These were two of her later books, published in 1933 and 1935 respectively, and some of the darker strains of her later life are already coming through.  There’s still much that is funny, charming and hopeful, but there are definitely some deeper shadows here than in earlier books.

Pat of Silver Bush follows Pat from childhood to girlhood, up to around age 18.  Mistress Pat ranges over eleven years, bringing Pat to about 30.  Pat is passionately devoted to her home of Silver Bush and her family, vowing that Silver Bush is all she needs and deeply hating any change.  She is joined by two beloved friends, Bets and Jingle.  The most striking character may be Judy, cook, storyteller and mother figure for Pat.  More spoilers to the story below!

All of Montgomery’s heroines have some of her traits, and she mentions in her journals endowing Pat with her deep love of home and hatred of change.  Pat is a bit of an odd heroine, still ecstatic in her joys (as Montgomery’s heroines tend to be) but much more wrung out by life.  Emily has her dark moments, but Pat seems especially tragical.  The books are not so grim that I’d call her tragic, but even with an element of humor in the mix, Pat still seems more pained by life than Montgomery’s usual heroines.  Likely this is because she was written while Montgomery herself was growing more pained by the direction of her own life.

The books are enjoyable on a surface level, with Montgomery’s usual nature rhapsodies, charming depiction of home life and much humor.  Judy is an absolute delight, with her Irish brogue, endless stories and parade of good food.  The last quarter of Mistress Pat veers toward the truly tragic, but most of the two books is still warm and affirming.

As ever, I find the books even more interesting on a meta-level, and the lines to Montgomery’s own life are easier to draw here than in most, especially in Mistress Pat.  Because I find it fascinating, indulge me in letting me tell you the depths I’m seeing!

Pat is one of the few Montgomery heroines with two living parents, and yet we see very little of them.  Her father is generally busy on the farm, and her mother is a sweet, gentle, sainted but very, very quiet woman who seems usually to be in the next room.  I’ve written about parents in Montgomery’s fiction before, and Pat’s family bears the trend out.  It’s easy to see the connection to Montgomery’s own father (too busy out west on important work to care for his daughter) and mother (who died young while Montgomery was a toddler and was ever idolized).  Montgomery gives Pat a mother, but doesn’t seem to know what to do with her–in life’s crises, we usually see Judy stepping in instead. 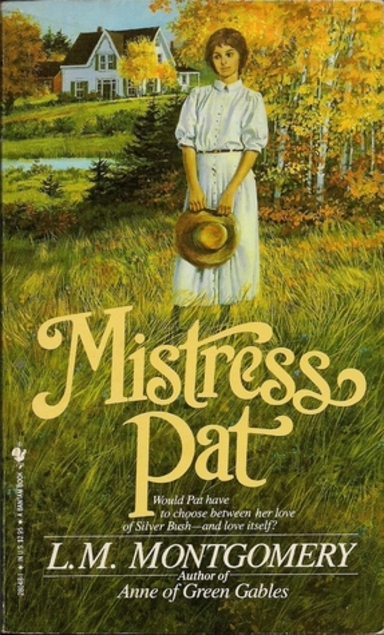 Sid, Pat’s beloved brother, has a clear connection to Chester, Montgomery’s older son–unfortunately.  Pat is devoted to Sid, but worries about him one day leaving her.  Ultimately he commits a greater betrayal, eloping with Pat’s hated schoolmate May Binnie, and bringing her into Silver Bush to disrupt all the home peace.  Chester also brought endless stress and worry to his mother, including through an unwise elopement.

And how about David Kirk, who Pat spends part of Mistress Pat engaged to?  Well, I don’t think Kirk as an accidental choice of names.  Scottish for “church” (and Montgomery loved Scottish literature and history), David Kirk reflects Montgomery’s husband Ewan, a minister.  It’s also notable that David had PTSD (though we never see it), and Ewan had some sort of clinical depression (which fills Montgomery’s later journals).  Pat likes David very well and doesn’t want to lose him in her life–as Montgomery wrote about her husband.  But Pat doesn’t romantically love David, and Montgomery didn’t love Ewan.  Pat becomes engaged at a moment when life seems empty, with few other prospects.

Unlike Montgomery, Pat is rescued from a loveless marriage when David himself breaks their engagement, knowing Pat doesn’t love him enough and refusing to go through with it.  That choice brings some very interesting questions about Montgomery’s own marriage–and makes me wonder, sadly, what it reflects that Montgomery wrote Pat remarking on there being a kind of freedom in loneliness, and freedom is sweet.

Montgomery, with her usual happy endings, saves Pat from a lonely existence, though.  Jingle, her childhood friend, grows up into her true love, though he doesn’t claim that place until the very end of the second book.  He returns at the crucial moment from far out west to marry Pat and bring her into a new, happier life.  And who is Jingle in Montgomery’s life?  This one is a bit more of a stretch, but I think he’s Willie Pritchard, her girlhood beau who she met while out west.  She always swore she was never in love with him–but she gave him a gold ring as a token when she moved back east, and when it eventually was returned to her she wore it for the rest of her life.  Unlike Jingle, Willie never came to rescue Montgomery, because he died very young–which was when the ring came back.

Montgomery always insisted she didn’t draw her characters from life, and perhaps not.  But consciously or not, I think she drew her characters’ roles from that of people she knew.  And so once again, I liked the surface level story, but was fascinated by all the depths.  I like lots of Montgomery’s characters, but Montgomery herself is my favorite.

Buy them here: Pat of Silver Bush and Mistress Pat