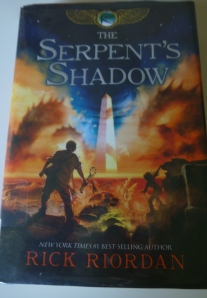 I felt terribly clever putting Rick Riordan’s newest book, The Serpent’s Shadow, on reserve at the library a month before it was coming out.  That meant I was only #23 in line! 🙂 They bought enough copies that I actually got mine quickly–and I already returned it for the 150 people now waiting.

If you don’t recognize the name, Rick Riordan is the author of the very popular Percy Jackson series.  The Serpent’s Shadow is the final book in The Kane Chronicles, his Egyptian mythology trilogy.  (Read my review of the first one.)  The trilogy follows Carter and Sadie Kane, a brother and sister who are learning their powers as Egyptian magicians, and practicing forbidden magic by engaging with the Egyptian gods (who are far more metaphysical than their Greek counterparts).  In the third book, Sadie and Carter have to face Apophis, a monster serpent determined to destroy the world and return it to pre-creation-type chaos.

As is typical for Riordan, the book is set in a compressed time period (I think only two or three days), there’s a clear deadline for the end of the world, and the characters have to pursue quests to get the pieces they need to fight the monster.  It’s a structure that I think works well–sometimes he can be a little episodic, but mostly I thought this was tied together well, had a good drive and focus, and both the looming deadline and the present crises kept the tension level high.

The story is told through alternating first-person narration.  The frame story is that an audio recording was mysteriously sent to Mr. Riordan, and throughout the recording Sadie and Carter have been passing the microphone back and forth.  I really enjoyed Carter in this book.  Throughout the trilogy, circumstances have been forcing him to take on more and more responsibility, and by the third book he’s coming into his role as a leader.  He’s still unsure of himself though, and that made him very human and relatable.

If Carter had been the only narrator, I would have loved this book.  I still liked it…but Sadie just irritated me completely.  She’s conceited, obnoxious, and has this incredibly aggravating tendency to view her personal life as of equal importance to the end of the world.  There are two guys she has crushes on, I have no idea what either sees in her, and I can’t help feeling that deciding between them is just not as important as the imminent destruction of the universe.  Especially when I wasn’t that drawn into her relationship with either guy.  (To give Riordan credit, I liked the romance in Percy Jackson better, and Carter also has romantic troubles that are better balanced with the larger looming threat.)  Some of Sadie’s most conceited, most relationship-drama lines are perhaps meant sarcastically or tongue-in-cheek, but it doesn’t come across that way enough for me.  I remember Sadie bugging me a bit in the previous books, but it was much more so this time.

However–it’s a problem but not an insurmountable one.  I did enjoy the book.  I sighed a little whenever I turned a chapter to see Sadie was narrating the next one, but even her sections had good aspects to them.  And it’s a good book, lots of excitement and lots of irreverent mythology humor, which Riordan is so good at.

This winds up the Kane Chronicles trilogy, but there were some very blatant hints at the end about new problems with “other gods.”  I’m seeing a Greek/Egyptian crossover coming, which seems like it would be enormous fun!  I’d definitely read that…even if Sadie is one of the narrators.

Other reviews:
Lost in a Book
21st Century Once Upon a Time
Knight Reader
Anyone else?

5 thoughts on “Another Day, Another Monster”