A quick update today, to say that I just got back from my trip to London and Paris.  I scheduled posts ahead, but if you noticed a distinct silence in the comments, that was why.  The trip was amazing 🙂 and you will be hearing (and seeing) more about it soon!  While I’m getting back on top of things, I have another classic review today, very relevant to my recent trip.

My hotel in London was near Kensington Gardens for a variety of reasons.  It really was a practical choice.  But I also stayed in that part of town because of J. M. Barrie.  The author of Peter Pan, he lived near Kensington Gardens, where he met the Davies boys, the real life inspirations for Peter.  He wrote another book inspired by the Davies, featuring Peter in a cameo.  It’s really that book, The Little White Bird, that’s given me my fascination with Kensington Gardens. 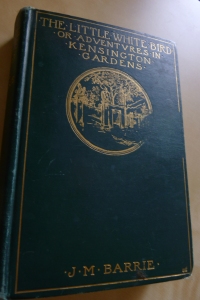 It really all began in the The Little White Bird

.  It’s very possibly my favorite J. M. Barrie book, even over and above Peter Pan.

The Little White Bird; or Adventures in Kensington Gardens is a tale about a man who befriends a little boy, and has adventures with him in London and Kensington Gardens.  If you’re not already suspecting the autobiographical nature of this novel, the little boy’s name is David.  Historically, J. M. Barrie befriended the Davies brothers in Kensington Gardens.  Not too subtle!  He also has a dog named Porthos, as did Mr. Barrie.  The man in the story is left unnamed.  He’s referred to as Captain W–.  I somehow picked up the habit of calling him the kindly old gentleman.

A review in The Times said of the book when it was first published, “The peculiar quality of The Little White Bird…is it’s J.-M.-Barrie-ness…whimsical, sentimental, profound, ridiculous Barrie-ness…Mr. Barrie has given us the best of himself, and we can think of no higher praise.”

I couldn’t put it better.  The Barrie-ness is often the best part of Mr. Barrie’s books.  The charm, the whimsy, the flights of fancy, the sweet sadness…the book is funny and tragic, absurd and heartbreaking, and sometimes all at the same time.  The tragedy, for the kindly old gentleman at least, is that David doesn’t really belong to him, and will one day grow up and leave him.

And there we come to the Peter Pan connection.  Besides thematic connections, there are also four chapters in the middle of the book that are about Peter.  They’re almost oddly unrelated to the rest, other than by geography, but I think they’re meant to be stories that the kindly old gentleman tells David.  In Peter Pan, Peter tells Wendy, “I want always to be a little boy and to have fun.  So I ran away to Kensington Gardens and lived a long, long time with the fairies.”  And this is that story.

We read about Peter’s running away from home, find out why he doesn’t grow up, see him meet the fairies, and also meet a girl he knew long before there was Wendy.  This is before Peter went to Neverland (although an island features) and the Lost Boys and Tinkerbell are yet to come on the scene, but there are other wonderful magical creatures and adventures.  The four chapters about Peter, along with one chapter giving a Grand Tour of the gardens, have been excerpted and published as Peter Pan in Kensington Gardens, with lovely illustrations by Arthur Rackham.

The Grand Tour (and map) is especially wonderful, because if you’re ever in London, I highly recommend spending an afternoon in Kensington Gardens with The Little White Bird in one hand.  It’s what I’ve done, and I spent a couple of hours going, “Oh, there’s Mabel Gray’s gate!  And the Round Pond!  And that must be the Baby Walk!  And this is probably the weeping beech where Peter sat!”  Even a century later, I was able to find almost everything J. M. Barrie described.  And it’s a little easier to get to Kensington Gardens than to figure out which star is the second one to the right.

One more note on The Little White Bird–George Davies, who was the chief inspiration for David, took a copy of the book with him to the trenches in World War I.  I think that’s one of the saddest and sweetest things I ever heard.

Even in much less dire reading circumstances, it’s a lovely and enjoyable book–and, of course, magical too.