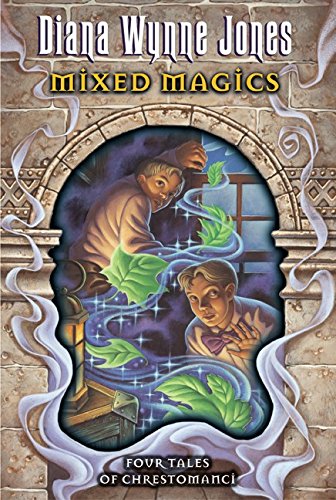 Being a completist, I had to include the four Chrestomanci short stories in my reread of the series by Diana Wynne Jones.  Fortunately, they’re conveniently gathered together in one book, Mixed Magics.  All four stories are excellent fun and well-worth the read!

“Warlock at the Wheel” – This story follows directly on Charmed Life, focusing on a very minor character from that novel.  The Willing Warlock comes off very badly in a confrontation with Chrestomanci, and decides that the answer is to travel to another world.  All seems to go according to plan–until the car he steals in this new world turns out to have an enormous dog and a very demanding child in the backseat.  Soon, the hapless Warlock is being bullied by the dog, the child, and even the car.

This is a funny little story that is definitely best read immediately after Charmed Life.  Personally, I would have had trouble making the connections otherwise!  The Warlock is a great character who intends to be villainous, but is rather too woebegone and put-upon to be very successful…

“The Sage of Theare” – In the very well-ordered world of Theare, the gods are horrified by a prophecy regarding the Sage of Dissolution.  They try to get rid of the recently-born Sage by sending him to another world, but Chrestomanci and company return him to his proper place.  When the Sage grows up, unaware of his destiny, Dissolution (and serious timeline muddling) are in store.

I can’t think too hard about this one, because it makes my head hurt.  There’s a lot of “wibbly-wobbly, timey-wimey” business going on, with events happening in reverse and the Sage on the hunt for himself…yeah, don’t ask, just read it!  Chrestomanci only has a small role, but all the same, his arrival at the Court of the Gods in his dressing gown is one of his best moments ever!

In terms of the larger timeline, I haven’t the slightest idea where this fits in among the others, as there isn’t much to place it in time!

I enjoyed seeing Cat again, and seeing Tonino from an outside perspective, after mostly being in his point of view in his book.  There are also some nice ties to The Lives of Christopher Chant, with a few of those characters returning.  And besides that, there’s a wonderfully sinister plot afoot, and some excellent mayhem and humor.

“Carol Oneir’s Hundredth Dream” – Carol possesses the wonderful ability to not only control her dreams, but to bottle, syndicate and sell them.  When she finds herself unable to dream her one-hundredth dream, her parents take her off to meet with Chrestomanci, who packed up his family after the previous short story for a vacation.  We follow Carol into her dream world, where we learn she has several principle characters, and they’ve gone on strike.

I love the whole concept of this one.  The idea of bottling dreams just fascinates me.  As a writer, I’m also intrigued by Carol’s struggles.  Essentially, she has writer’s block!  Even if most writers don’t have characters who literally mutiny, I think we all know what that feels like…

This is a quick little read with only the four short stories, but it has all the charm of Jones’ novels, and offers some nice extra pieces about the characters.  It feels sort of like a bonus to the rest of the series!

Other reviews:
Calmgrove
Aelia Reads
I am sad I couldn’t find many reviews…anyone else?