I recently reread The Lives of Christopher Chant, and have continued my chronological rereading of Diana Wynne Jones’ Chrestomanci series with Conrad’s Fate and Charmed Life.  Double review today!

Conrad’s Fate mostly focuses on 12-year-old Conrad of the title, whose magician uncle has told him he is cursed with a terrible Fate, and must go up to Stallery Castle and kill somewhere there to free himself of it.  Uncle magicians seem to never be a good thing, and all the sugar-coating in the world can’t put a very good face on a mission like that.  Conrad successfully obtains a servant job at the castle, but of course nothing goes smoothly after that.  He does make a friend of fellow-servant Christopher “Smith,” who is at Stallery Castle looking for his missing friend Millie.

This is a fun book to read chronologically after The Lives of Christopher Chant, because it fills in (some of) the missing link between the boy Christopher and the adult Chrestomanci of the other books.  Here Christopher is 15, and recognizably somewhere in transition between the two.  I would have quite liked to meet Christopher at around 20, to fill in a little more, but alas, we never got that book.

SPOILER WARNING: I think this book suffered in just one small way from being written after many of the others in the series.  At the end, Christopher and Millie’s wedding is tossed off as a by-the-way, which makes perfect sense if read after all the other books, where their marriage is a foregone conclusion.  Read in chronological order, it feels like there should be more to that story! SPOILERS DONE

Christopher and Millie aside, most of the book focuses on Conrad, who is remarkably likable for having come to the castle with murderous intent.  He’s so unhappy about the idea of killing someone, you see, and he’s so terribly earnest in all other ways.  He’s not a stock character by any means, but he is another of a collection of well-meaning, slightly inept boy heroes who populate Jones’ books.  They’re always such fun to read about, though!

I happened to be reading this at the same time that Downton Abbey was airing, which made for some interesting thought-connections.  Stallery Castle in many ways feels very like Downton Abbey…except with magic!  Magic starts running amok and disrupting the neat order of the servants hall, with disastrous results–of course! 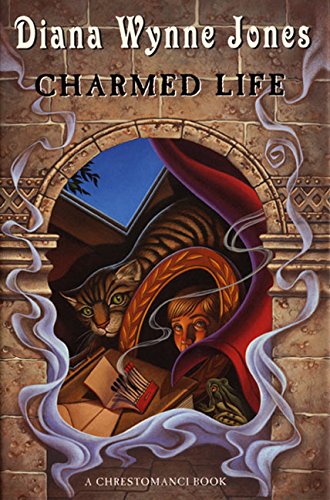 Charmed Life has its own boy hero, Eric “Cat” Chant, who is very thoroughly under the thumb of his erratic, witch-in-training sister, Gwendolen.  Cat and Gwendolen’s parents died in a boating accident, and they’re taken in first by a local witch and then by the mysterious Chrestomanci.  Gwendolen does not like life at Chrestomanci Castle in the slightest, and kicks up a series of magical pranks, culminating in changing places (sort of) with Janet, her double from another world.

Somewhere deep in my subconscious I tagged “Gwendolen” as an unpleasant name, and it may be because of this book.  She’s a nasty piece of work–but she also provides much of the excitement and entertainment of the story.  Cat is perfectly sweet and likable, but he’s also extremely reactionary for most of the book.  Chrestomanci punishes him at one point because he didn’t try to stop Gwendolen from causing trouble, and there’s some valid justification in that.

We’re mostly in Cat’s point of view so I understand how he feels about Gwendolen and why he doesn’t take a more active role…but I still kind of want to shake him.  Although, to be fair, I mostly feel that way when I think back on the book.  When I was actually reading it, I didn’t give that much thought, because the crises and the humor come fast and furious and I didn’t do much analysis of Cat’s actions.

This was the first book  of the series written, and there are some mysteries lost by reading it later.  When you know who and what Chrestomanci is, it clears up a lot of questions Cat has (and probably the reader is supposed to have).  Christopher of the previous two books is Chrestomanci here, and on the opposite side of the order-to-read question, I did have fun spotting little hints and clues that were expanded so much more in The Lives of Christopher Chant.

And Chrestomanci is, of course, an absolute delight as a character, so suave and sophisticated and vague in a terribly incisive way.  Not to mention his fantastical dressing gowns!  Just one representative quote on the character: “Chrestomanci smiled and swept out of the room like a very long procession of one person.”

Chronologically-read or publishing-order-read, these are delightful books in a delightful series.  With three down and several to go, I’m not sure I have a favorite yet, and none have been disappointing.  I look forward to the rest!

Charmed Life
The Rhubosphere
The Book Smugglers
Readers By Night