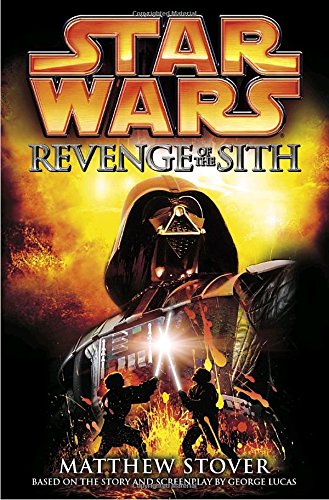 My book club has a habit of talking about Star Wars. I don’t know how it happens, it just does—and eventually someone suggested that we ought to read a Star Wars book. I think we were discussing the failings of the prequel trilogy at the time, and so elected to read the novelization of Revenge of the Sith, Episode Three. That might sound like an odd choice, but two of us (including me) remembered it as being almost bizarrely better than the movie. And it really was, making me quite impressed with the author, Matthew Stover.

The book assumes that you’re familiar with the first two movies in the trilogy, and picks up midway through the Clone Wars. We open with an extended battle sequence, as Jedi Knights Anakin Skywalker and Obi-Wan Kenobi fight to rescue the kidnapped Chancellor Palpatine. When they return to Coruscant, they find politics much harder to deal with than the simplicity of battle—and Anakin is increasingly torn between his duty as a Jedi, his love for Padmé, and his own darker desires. And…I’ll leave the plot summary there, but spoilers will follow in the discussion!

The best thing about the book is that there’s just so much more than there was in the movie. Somewhere I heard it was based on an earlier, longer script that included scenes not in the final movie. Stover must have brought more to it too, though, because some of the best parts are internal character struggles, or beautiful descriptions of battles that were just so much cooler in the book than in the movie.

The first third or so of the book is occupied by the extended battle sequence, and even though I’m not usually one for action scenes all that much, it was the best part. It was so well done, getting into so many character elements in the course of the fight. I particularly love the lightsaber fight with Count Dooku—there’s an exploration of the different fighting styles involved, the ways the fight turns and then turns again, the internal struggles and passions of the characters…it’s really beautiful and is long and in-depth without dragging at all. The last time I read this, I rewatched the movie shortly off and was shocked to see that the same fight in the movie is perhaps two minutes or shorter.

The book also accomplishes the most important thing that I thought the movie failed at—it made Anakin into a hero. He’s famous throughout the galaxy, the champion of endless battles, one-half of the unbeatable team of Kenobi and Skywalker…and when that person falls to the Dark Side, it’s sad. When the moody teenager of the movie goes evil, well, it wasn’t that far of a trip!

Since I just italicized two words in the last paragraph, I may as well mention here that Stover did have a bit of a thing for italics.  I don’t mind some judicious italics, but three separate in one line of dialogue?  Again and again?  Um…bit much.

That’s a minor problem.  A bigger problem is that, sadly, the book just could not save the Anakin and Padmé romance. Stover tried, I really think he did…but you just can’t do anything with Padmé, and you really can’t do anything with her death by way of a broken heart (although the book did cut out that hideous, “Anakin, you’re breaking my heart!” line of dialogue). And the big fan of strong, capable heroines that I am, well, I have to go on a bit of a rant about Padmé’s death, don’t I?

I honestly don’t know how a franchise that gave us the awesome Leia managed to also give us a heroine who literally dies from lack of willpower. Maybe Padmé’s end feels even worse because she was a cool character.  She was the elected official ruling an entire planet, for heaven’s sake!  She had power and she had agency and she had a brain that she was making good use of.  But then she fell in love with Anakin Skywalker and nothing she had been or done mattered anymore compared to being his wife (that’s virtually a direct quote).  She has no agency in this book or movie, and ultimately doesn’t even have enough will to go on living.  And I hate that.

And just by the way, I am confident that if Han Solo betrayed the Rebellion, turned evil and murdered children, Leia would kill him.  She would pick up a blaster and kill him.  And then she would be cry and be heartbroken, but eventually she’d get up and go on and become the new president of the Republic.  And when I can see so clearly how strong and powerful Padmé could have been (because her daughter is!) it’s all the more frustrating.

All right, rant over! And the rant isn’t really a criticism of the book, it’s of the story the book is based on.  The book is great!  Don’t read it if you don’t already like Star Wars—but if you do like Star Wars but have been known to bemoan the prequel trilogy, this may make you feel better about at least a third of it.

Other reviews:
Book Loons
Prophets of the Force<
Wookie Hut Book Reviews
Anyone else?

Buy it here: Revenge of the Sith

One thought on “Book Review (really!): Star Wars – Revenge of the Sith”