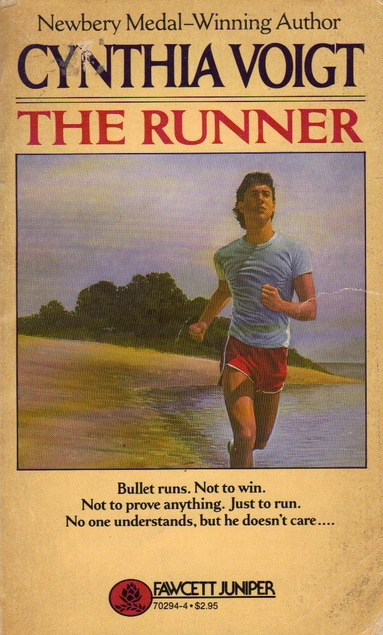 After rereading and reviewing the first two books of Cynthia Voigt’s Tillerman Cycle, I skipped on past #3 (even though it’s my favorite) because I read it relatively recently, and went to #4, The Runner.  It’s chronologically earliest, set ten years before Homecoming opens the series, and focuses on a different generation of Tillermans.

The title character is Bullet Tillerman, the uncle of Homecoming‘s Dicey.  Like Dicey’s Song, this is mostly a character book.  Bullet is a high school student during the Vietnam War, and the champion cross country runner in his school–but he doesn’t care about winning, only about running well.  At home, he fights a mostly silent battle of wills against his father, while at school he holds himself aloof from the racial tensions rocking the student body.

I normally love Voigt’s focus on character…but in this case, I couldn’t get into the particular character she focused on.  I wrote in my review of the earlier books about Dicey’s and her grandmother’s determination to hold themselves apart and not be dependent on anyone.  Bullet shares the same characteristic with his mother and niece, but more so.

I don’t know how many times Bullet thought “I don’t care about that” or “that has nothing to do with me” or “that’s not my problem” and so on.  Sometimes it was all three of those statements in two pages.  By the end of the book there are hints that his efforts to keep everyone and everything at arm’s-length are because it isn’t true that he doesn’t care…but he never really let the wall crack, and he ended up keeping me as a reader at arm’s-length too.

Maybe the difference between Bullet and Dicey is that I could clearly understand Dicey’s self-defense and why it felt necessary to her.  I can see how Bullet has been hurt by his father, but I’m not really sure what he’s trying to defend now.  That sounds a little strange, but Bullet seems to have no goals, no connections, and no interests.  He’s so determined not to be put into a box that he doesn’t seem to have defined himself at all…while being totally sure that he knows and controls himself.

His one passion is about running, but I’m honestly not sure what he’s getting out of that, or why he ever took it up to begin with.  My best impression is that he realizes it’s something he can be good at, and he values a job well-done.  But I don’t know why running rather than, say, schoolwork (which he just doesn’t bother to do), and I don’t know what he wants to accomplish with the running.  Maybe I’m looking at it the wrong way and the point of the running is the running…but that doesn’t feel like enough somehow.

This was an interesting read and an interesting character study, but while I appreciated it intellectually, Bullet was too distant for me to really engage emotionally.  This book does provide some added layers of background to the characters of the other books, but I don’t think it would be very strong stand-alone.

The Runner is most directly tied to #5, Come a Stranger, with some plot connections and definitely thematic connections around race.  Possibly not a coincidence, I remember that that book never worked as well for me as the others in the series (although for different reasons than my issues with #4), so I expect to go ahead to #6, Sons from Afar, which puts the focus on Dicey’s brothers.  More soon!

Other reviews…I couldn’t find any!  Tell me about yours if you have one.

Buy it here: The Runner