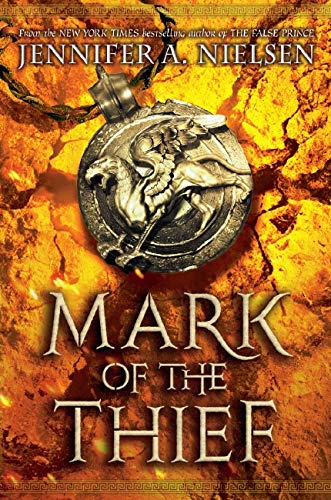 I loved Jennifer Nielson’s False Prince (and liked its two sequels reasonably well), so I really wanted to love Mark of the Thief.  And from that, you already know it didn’t go all that well, right?  There were a lot of good things in here–but somehow I could never quite get into this book.

The story is centered on Nic, a slave in a Roman mine a few centuries after Julius Caesar.  Nic is sent into a secret chamber deep in the ground to seek Caesar’s bulla, a kind of amulet.  Not unlike Aladdin, Nic manages to take possession of the bulla himself, and finds that it grants powerful but unpredictable magic.  Soon Nic has a price on his head, with powerful Romans from the Emperor down chasing him, and the fate of the Roman Empire at stake.

Ancient Rome is an era I enjoy, and I like the concept of a scrappy, defiant slave seizing power and freedom.  There’s lots of conspiracy and mystery in here, with neither Nic nor the reader always sure who can be trusted.  We also get a cool griffin, a tough girl Nic gradually builds a relationship with, and plenty of displays of magic.  Because also, magic in ancient Rome?  Very cool.

So.  Where did I run into a problem?  It never quite felt like ancient Rome.  We got togas and trips to the Forum and references to the gods, but the society itself didn’t feel right.  Most of it comes down to that Nic just didn’t feel like a Roman slave.  He was too scrappy and defiant, to the point that he isn’t overcoming constraints–the constraints just don’t seem to exist.  He calls his overseer at the mine, Sal, by first name, he argues with other owners, and perhaps most problematic of all–his owners seem willing to explain what they’re doing and ask if he’d please cooperate.  Which, um…he’s a Roman slave.

And there’s Nic’s sister.  Sal, the overseer, has a fondness for her…so he’s waiting a year until she comes of age, and then he’s going to marry her.  I’m sorry, but no.  Maybe some free Roman men genuinely fell in love with slave girls, freed them and married them, but that wouldn’t be the cultural norm–and it’s being treated like it is here.  Sal is even painted as a villain for his (incredibly restrained and generous) interest.

I think Nielson ran into an issue here, trying to write a kid-appropriate book about Roman slaves.  The bit with the sister, maybe you couldn’t write it historically accurate and keep it appropriate (although Edgar Rice Burroughs was a master of discreet writing on this very subject…)  Personally, I would have chosen to just leave it out entirely, because it’s not very plot-significant, and it became a major stumbling block for me.

And the problem with Nic’s defiance…I don’t know, but from the excellence of The False Prince, I wish there could have been more nuances and subtleties here to hit a better tone.  As it was, I didn’t believe the class system so I couldn’t invest in the book.

This may be an issue that other readers (and certainly younger readers) wouldn’t have at all, so I don’t want to entirely discourage reading the book.  But this was my experience…  And, also, be warned, the book ends without resolution.  I think I can live with that, but you may be committing to a three-book read if you pick this up!  So you might want to read The False Prince instead.

Other reviews:
Charlotte’s Library
Bookish Serendipity
Pages Unbound
Anyone else?

Buy it here: Mark of the Thief