Are you intrigued by a masked man in the shadows?  Love being swept away by stirring musical tragedies?  Want to visit 1880s Paris?  Then this challenge is for you!

Join us to venture below the Opera Garnier and across the underground lake for a Phantom of the Opera Reading and Viewing Challenge.  Since Gaston Leroux’s first publication of The Phantom of the Opera in 1909, the story has been told, retold and continued dozens of times, on the screen, on the stage, and on the page.  Get a little more Phantom into your life in 2020 by participating in this challenge to go exploring through the many versions of the Phantom.  Maybe you’ll meet a new phan friend, or find a new version of the story to love.

I want this above all to be fun, so the rules (which are really more guidelines) are simple and, I hope, welcoming to all.

What Qualifies: Any book, movie or play based on Gaston Leroux’s Phantom of the Opera, or an obvious sequel or prequel to the story.  If there’s a masked man with a deformity in love with a singer, while hiding in an opera house, it probably qualifies.  I’ve provided a (non-comprehensive) list of ideas at the end of this post.  Rereads/rewatches are just as valid as new ones, although if you’re someone who watches the Claude Rains Phantom every Saturday, it still only counts as one.  The exception to that rule is if you see a play version more than once in the year, with different lead actors.

The Gaston Leroux Level: One version
Dip your toes into the underground lake with just one version of the Phantom story.  Spend the afternoon watching a movie or read one book to meet this goal.  Note that the title is only for fun; your single version does not have to be Leroux’s original.

The Lon Chaney Level: Five versions OR one of each type
Ascend farther up the marble stair and try five different versions of the story–OR watch one movie, watch one play (filmed versions of live plays count) and read one book.

The Charles Dance Level: Twelve versions
Declare your Phantom dedication by trying for twelve different versions.  Search into the shadows and behind every secret door to find that many!  They do exist and it’s possible to achieve.

How to Participate: Start by putting a comment below stating your intention to participate!  If you have a blog, feel free to post about your plans and link it in your comment.  If you know what level you’re aiming for, include it (though you’re welcome to change as the year goes on, to a higher or lower level.)  If you know what versions you’d like to explore, include them too, but you don’t need to have anything set in stone now.

As the year goes on, follow the Phantom below the Opera with whatever version(s) you choose.  I’ll post quarterly (at the end of March, June, September and December) with my updates, to provide a space for everyone to share their experiences so far.  If you’d like to review versions on a blog (or Goodreads, or any other platform), this will be the place to put up links and share your reviews with others.

I’ll also be posting periodically about the Phantom of the Opera throughout the year, so I hope you’ll stay tuned and keep reading.

Shameless Self-Promotion: I’m the author of The Guardian of the Opera trilogy, with the first book coming out in June, 2020.  My retelling explores the story from both the Phantom’s and Meg Giry’s points of view.  The strange events at the Opera Garnier look a bit different as Meg experiences them, and I think you’ll find a Christine who is not quite what you expect!  Reading my book qualifies for the challenge.  I’ll be posting more about it as I lead up to release day.

A Note about Decorum: Fans can get very passionate about their fandoms–I love that, and I want you to be passionate about the Phantom and the versions you explore!  If you watch or read something you really hate, by all means tell us why.  However–if someone else loves a version you despise, or is passionately in favor of a character pairing you think would be a train wreck, please be respectful of each other’s views.  You don’t have to agree on whether Christine should choose the Phantom or Raoul, but do be cordial.  The Phantom rarely encountered kindness in his life; let’s be kind to each other.

Media: You are welcome to utilize the challenge banner or square image to declare your intention to participate.  Put it on your blog or post to social media. 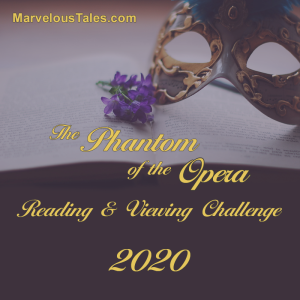 And finally, a (non-comprehensive) List of Ideas: These are some of the versions of the story I have personally explored, and I think include the most significant ones.  Since many go by the same title, I’ve attempted to provide distinguishing clarification, as well as the year and media type.  I can’t claim all of these are good, only that they all explore the story of the Phantom of the Opera in one mask or another.

And if you need even more ideas, here is a terrifyingly long list.

See you below the Opera!