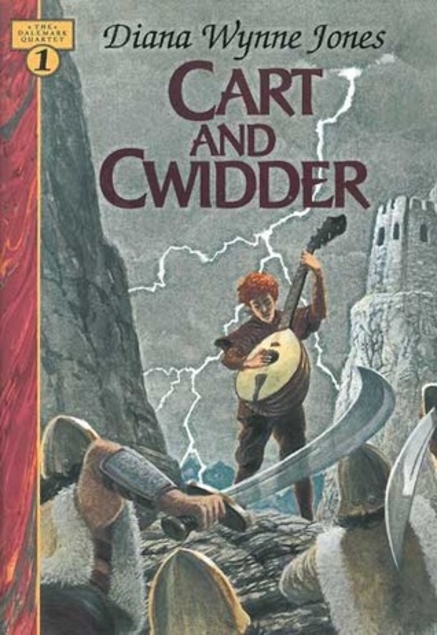 Cart and Cwidder is about a family of musicians traveling in a cart through Dalemark.  And just to clear up the title, a cwidder is a musical instrument (somewhat like a lute, I think).  Moril is our main character, the dreamy one of the family who isn’t sure about his talents.  The family is on their annual trip through South Dalemark, ruled by oppressive earls, back towards the “free North.”  Moril and his siblings find themselves suddenly thrust into the center of a brewing war when their father is killed and they must undertake a vital task he left unfinished.  Oh, and that cwidder in the title?  Definitely magical.

This has a neat, tight plot centering mostly around one major conflict as Moril struggles with his mission, and with his own character arc.  It’s satisfying in that way, not so much as a sweeping epic as one episode in an interesting world.  I liked the characters, but the world is probably the best part.  Jones sets up a tense political situation with real peril, introduces a culture of traveling musicians, and creates a compelling magic system around music, with roots in the world’s folklore and legends.  On the whole, very cool!

I originally read these books as an omnibus (I think of all four, though it might have been in two volumes), and I’m not sure I ever realized how short this one is.  Only 200 pages! 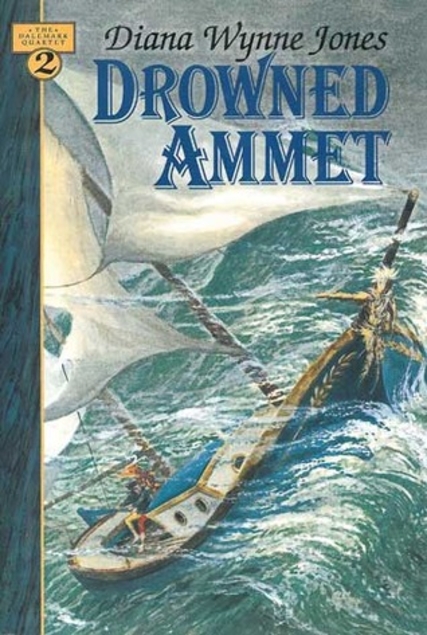 Drowned Ammet is set in the same world, but other than very minimal overlapping, it’s entirely independent.  It’s second in publishing order, but I’m not sure there’d be any harm in reading it first.  This one centers on Mitt, who grows up with a mission (encouraged by his mother) to assassinate the cruel Earl Hadd, and implicate the Free Holanders who he believes caused his father’s death.  When the attempt goes awry, he ends up on the run, eventually stowing away aboard the Wind’s Road.  There he meets Ynen and Hildy, Earl Hadd’s grandchildren, who have their own reasons for fleeing.  It all gets more mystical when the ship comes under the protection of the local deities, Old Ammet and Libby Beer.

I like Mitt quite a bit as a character.  He’s a nice mix of hard and innocent, who genuinely has a rough past yet isn’t as tough as he thinks he is.  Ynen and Hildy provide a very interesting opposite perspective, and the struggles of all three to understand each other are compelling and believable.

Looking back I feel like there was a lot going on throughout this book, but I also remember I wasn’t really engaged until Mitt’s story joined up with Ynen and Hildy’s.  I don’t know why, and it might just be me!

We get some very different magic here from what we saw in Cart and Cwidder, and the gods on the Holy Islands are among the few things I still remembered since my high school reading of these books!

One note I find interesting is the tendency in Jones books to have utterly ineffectual parents.  Moril is about thirteen, while Mitt is around fourteen.  Both have fathers who are absent at the key crisis, and mothers who don’t understand them, are mostly well-meaning, but probably do more harm than good.  I don’t know exactly what conclusion I’m making from that, but it does seem to be a trend in Jones books!

These books don’t have quite the snap and spark of the Chrestomanci books, and not quite the same humor–although there are some funny bits, it never gets too dark (the darkest things are always alluded to fairly discreetly, at least), and Dalemark is a compelling world.  I also found the third and fourth books in the quartet to be stronger than the first two…but that will be another review!

Other reviews:
Sophisticated Dorkiness
Reading the End
Books and Life
Anyone else?