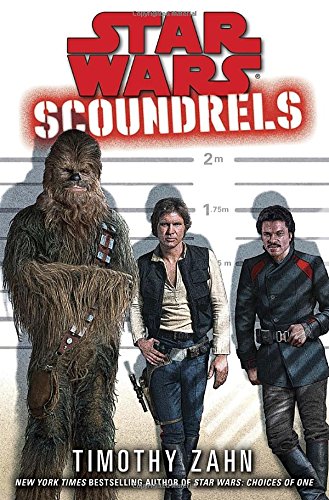 I’ve had Timothy Zahn’s latest (written, not chronological) Star Wars novel on my to-read list for a long time, and the aftermath of the new movie seemed like the perfect time to finally get to it.  And then it took me a while longer to get a review up! After the completely Han-less Survivor’s Quest, I went on to Star Wars: Scoundrels, or what I’d kind of like to call Han’s Ten. Because it’s basically Ocean’s Eleven. In Star Wars.

Set between A New Hope and The Empire Strikes Back, Han is still not sure just how he feels about this rebel group or their snobby princess, and more importantly, he’s got a price on his head he needs to deal with before Jabba’s bounty hunters catch up to him. Luckily, he’s got a line on a heist. With Chewie beside him, they gather together a team of highly-skilled crooks for a highly-complicated sting operation to steal from a very wealthy crime lord.

It was fun to read a heist story with Star Wars elements. It’s set very much removed from the larger Star Wars universe, but with little touches here and there. Two of the characters are from Alderaan and still reeling from their planet’s destruction. The Empire is sniffing around, though more as a peripheral threat than the primary enemy. With Luke absent, the Force (omnipresent in Survivor’s Quest) is barely mentioned, but we get other details making this feel like the right universe.

Zahn has a nice way in his books of bringing planets and cultures to life more than we get in the fast-paced movies, and offering some idea of what it would be like to live in this universe, when not on a high-speed, high-stakes adventure.

The heist details are super-complicated and the plan changes a few times, but my favorite thing about that was the rampant paranoia—really! Everyone involved, from the mark to the criminals to the various people circling around the situation, have moments of imagining wildly elaborate and complicated conspiracies that could be happening. And the question has to be…are you still paranoid if they really are out to get you?

This was a very unusual book in the Star Wars canon, considering how few major characters appear and how removed it is from the usual concerns of the universe. But it was fun and exciting and did have a very clever, last-few-pages twist that ties into a few more threads of the larger universe. But I’ll just leave it at that!