When I saw a review copy offered of Sunborn Rising: Beneath the Fall by Aaron Safronoff, I couldn’t resist the gorgeous illustrations!  And they turned out to be frequent throughout–and really very gorgeous.

The story is set in a fantastical realm where many different species of arboreals live in an enormous treetop, with only the faintest myths of what lies below—because no one ever returns from the Fall.  Barra, a Listlespur, is intrigued by what could be down below the world she knows, in large part because her long-dead father was an explorer.  With her two best friends Tory and Plicks, both other species, she sets out to investigate rumors of a threat from below.

The illustrations and the worldbuilding are wonderful in this book.  Barra and her friends  live in a truly other world, with strange plants and customs and ways of handling the day-to-day things of life.  For example, time is tracked by certain flowers that open or close at different times.  It’s also really fascinating to see a society of numerous different species all living harmoniously together.  I believe every creature is an invented species, although most bear some resemblance to a real animal—Barra is cat-like, Tory resembles some kind of insect with an exoskeleton (although he’s bipedal), and Plicks is some sort of adorable furry creature! 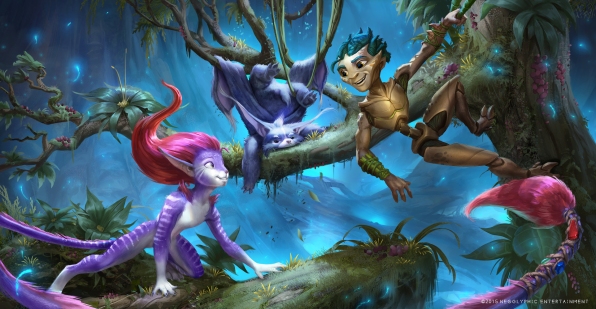 As cool as the different species all are, it also got a little confusing at times.  It’s clear that every species has many members, but we mostly only meet one major character from each species—so there are constantly new species to get my head around, and it was hard to keep track of what was what.

There’s a nice friendship at the center of this—Barra, Tory and Plicks are all strongly loyal to each other, even (or perhaps especially) when the situation they’re in grows more dangerous.  I particularly liked Plicks.  Barra is very intrepid, Tory is self-assured, and it’s Plicks who worries the most about the danger, the right choices, and whether he’ll be able to help his friends, or if he’ll just be a burden to them.  That made him quite endearing.

Near the end of this book I began to worry that it wasn’t going to conclude—it’s first in a series and we could have been left with a cliffhanger.  But there is a resolution, a happy one, but still openings for more stories to come.

I’m also happy to offer an interview with author and illustrator Aaron Safronoff!  Check it out here.