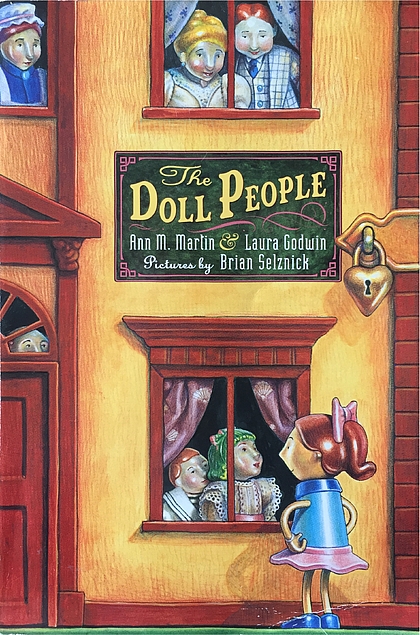 I happened across The Doll People by Ann M. Martin and Laura Godwin in my library’s audiobook section and thought it looked to be some light entertainment.  It was–and it wasn’t.  Rarely have I been so completely and clearly of two minds about a book!

The Doll People is about a family of dolls, particularly little girl Annabelle Doll, who are all alive unbeknownst to their humans (of course).  A family heirloom, the Doll family and their elegant house have been passed through several generations of daughters.  Two plot threads dominate the book: Annabelle’s decision to search for her Auntie Sarah Doll, who went missing forty-five years ago, and the arrival of a new, modern family of dolls who do things differently–but may provide a new friend for Annabelle.

When I read kids books now, I often have a sense of seeing something I might not have as a kid myself…but not usually to the extent that I did here.  I feel like I read this book on two completely separate levels.  On a kid’s level, it’s a light, entertaining read.  Annabelle is a likable heroine who goes through some character growth becoming more daring (and dragging her reluctant family along).  There are a few expeditions and adventures, threats from the family cat and the danger of being caught by humans, and the fun of making a new friend.  And of course, there’s the magical idea of a whole world going on when the humans turn their backs.

And then there was the other level.  Reading this as an adult, some aspects of the book became deeply horrifying.  Annabelle’s life sounds awful.  Annabelle and the book itself don’t particularly seem to think so, but it sounded that way to me!  The Doll family must remain perfectly still virtually all the time.  They have to stay wherever the humans left them, even if that means standing on their head in a stray corner.  And that’s not just when a human is actually looking–they’re so cautious, it seems to be whenever a human is in the house.  They only snatch a few hours of (relative, careful, quiet) freedom in the middle of the night.

Since they can’t do anything that would betray their aliveness to humans, they can’t change anything in their surroundings .  They can’t create anything, move anything, have an impact anywhere.  Thought and study would be free, but they only have two song books and no other reading.  They could be undergoing deep philosophical growth…but they’re not.

As heirlooms, Annabelle and her family are a hundred years old.  But while the humans are growing and changing and giving way to new generations, the dolls are still exactly the same.  Annabelle will always be eight, the family baby will always be a baby, and Annabelle remarks specifically that their daily life hasn’t significantly changed in all these years.  I always say I don’t like change, but this is stagnation.

Of course, part of the point of the story is that change does come…but it doesn’t really change the larger situation.  I kept comparing this to The Borrowers (not dolls, but tiny people) and Toy Story, neither of which had this same depressing element.  Those characters seem to be living much more meaningful lives.  The Borrowers are industrious and creative and carry on quite human lives in tiny hidden places.  The toys in Toy Story have a complex community and active lives every time a human so much as glances away–plus they emphasize how much they love the child who plays with them (which brings other tragedies…but that’s a different issue).  The Dolls like their humans, but being played with seems rather awful too, grabbed and dragged about helplessly.

I was also particularly struck by a scene when the Dolls have a party and pretend to eat.  It struck because it emphasizes the way the dolls are essentially fake humans–and that may be why it’s so horrifying.  If they were really different creatures, with different needs and desires, then perhaps their lifestyle would be perfectly comfortable for them.  But they behave essentially like humans, except trapped by all these constraints–including the inability to actually eat.

On the child level, I actually enjoyed this book well enough, and might even recommend it for a child reader.  But on the adult level, it stirred a whole lot of thoughts.  That’s not necessarily a bad thing–next time I feel like bemoaning some change in my life, I’ll try to remember Annabelle Doll, because it could be so much worse.

Other reviews:
Best Kids’ Reads
Booklearned
Anyone else?

Buy it here: The Doll People