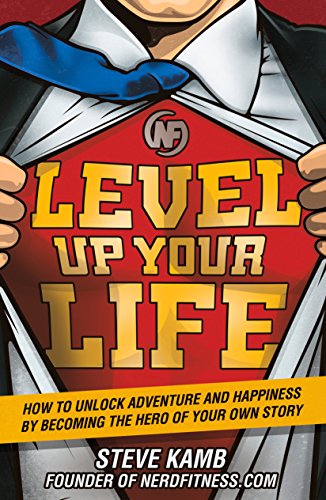 I’ve had Level Up Your Life by Steve Kamb on my to-read list for many months.  January is always a good time to read books about goals and intentions, so I finally picked this one up.  And I’m so glad I did, because it was an excellent start to the year!

Level Up Your Life approaches life transformation from a video game, geek perspective.  Kamb tells his own story throughout, about his love of video games when he was young (and still), and how he used the game mechanics of video games, with a little guidance from the Hero’s Journey classic story arc, to transform his life into something far more epic.  Basically, he set audacious goals, assigned experience points for completing tasks and quests, and has set his sights on “leveling-up” to Level 50, which would mean living his best life, as his best self.

I feel like this is a great book for a person with a certain mindset–one shared by probably most people I know.  It would help to have some sci fi interests, as he draws heavily from superheroes, movies and video games for his examples.  I knew the movies, and even for the video games I only knew by name, it was easy to follow the points he was making.  You also have to like the idea of approaching your life and completing your goals as something you can keep score on and continuously improve.  Which I found to be a pretty cool idea, actually!

Kamb does put a lot of emphasis on two particular ways of living an epic life: physical fitness and travel.  Before (and while) writing this book, Kamb runs NerdFitness.com, which has a similar approach specifically for getting into physical shape.  So it makes a lot of sense that he focuses in that area, but it did make the book a little heavy in that direction.  Likewise, he clearly has a love for semi-spontaneous, hostel-staying, backpack-carrying travel to exotic locales.  I like traveling…but not like that!  I may not be daring enough, but the fact is that I have exactly ZERO desire to go on an international trip without knowing exactly where I’m sleeping every single night, thankyouverymuch.

Despite the book being a little heavy towards fitness and travel, I thought his concept was really applicable to other goals.  My goals revolve more around artistic pursuits (writing especially), relationship-building, personal/spiritual growth, and some (better planned) travel.  I still felt like I could very much relate to his ideas and suggestions, and I mostly liked his idea of setting audacious but super specific goals: not “learn to play the piano” but “play ‘Piano Man’ in a bar and get everyone to sing along.” (His goal, not mine!)  I’ve always liked concrete goals rather than vague resolutions at New Year’s, so that spoke to me for sure.

I’m not positive at this point that I’m going to fully implement Kamb’s leveling-up strategy in my life, but it definitely was some good inspiration at the beginning of the year.  He did get me thinking about some big goals and ideas–and I might yet start applying experience points to some of them and see where it takes me!

2 thoughts on “Book Review: Level Up Your Life”