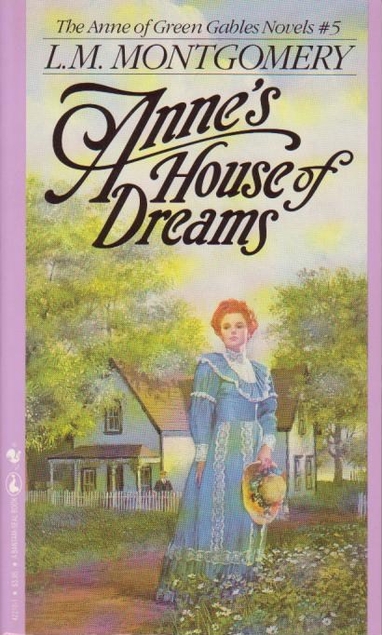 I’m going to be a bit timey-whimey, and after reviewing Anne of Ingleside (Book Six), I’m going to jump backwards and review Anne’s House of Dreams (Book Five), of the Anne of Green Gables series by L. M. Montgomery.  I reread them in the proper order—but I was excited about Anne of Ingleside so that review was written faster!  I had a lot of thoughts about Anne’s House of Dreams too though…and along some of the same themes, in fact.

Anne of Green Gables has grown-up by this book.  Near the beginning, Anne marries her sweetheart Gilbert, and they set off from Avonlea to their new “house of dreams” in another village on Prince Edward Island.  Changing location gives Montgomery the opportunity to introduce an entire new community of friends for Anne, including sharp-tongued Miss Cornelia, storyteller Captain Jim, and beautiful, tragic Leslie.  Although Anne is still in theory the protagonist, it’s the “supporting” characters who truly shine here.  Spoilers galore to come!

Besides being chronologically earlier, this book was also written significantly before Anne of Ingleside.  It doesn’t have the same themes of disillusionment–and yet, for a series that is generally classified as for children, it has very adult themes.  Montgomery writes with a light touch and an ultimate positivity that somehow masks how dark some of her concepts actually are, and like Anne of Ingleside, I didn’t fully appreciate it until I got older.  And now I think I appreciate the book even more because of those mature notes that have more depth than childhood idylls.

The frame of the story is Anne’s new marriage to Gilbert, and their idyllic little House of Dreams.  The Blythes are evidently quite happy together, but Gilbert is already beginning to fade into the background, consumed with his doctoring.  Anne’s (and the reader’s) focus is much more on new friends.

Miss Cornelia is a delight of a character, good-hearted but sharp-tongued, never ill at ease or flustered.  One of the best moments is when Miss Cornelia comes to call, Gilbert hides in the study to eavesdrop (with Anne’s knowledge), and at the end of the visit Miss Cornelia coolly asks if Dr. Blythe enjoyed listening.  Miss Cornelia likes Gilbert well enough, but otherwise has very little use for the men.  She has an endless trove of stories of how the men of the community mistreat their saintly wives–and if ever she disapproves of something one does, it’s “just like a man.”

Miss Cornelia is a largely comic figure, and yet…  Anne learns (and tells the reader) to take Miss Cornelia’s stories with a good deal of doubt, and yet.  Miss Cornelia brings in a strain of social commentary that we haven’t seen in this series before, with dark hints of true poverty, alcoholic and/or abusive husbands, and deeply unhappy marriages.  Montgomery was constrained by her time period in what she could write, and it’s hard not to see Miss Cornelia as, not necessarily accurate at face value, but still a way to comment in “acceptable” fashion on real social problems.

Captain Jim is Anne and Gilbert’s near neighbor, keeper of the lighthouse and an old sailor who’s come home.  He’s a gentlemanly figure with a trove of stories about his life at sea.  He also has a tragedy in his past, a love who drowned whose memory he has remained true to.  Captain Jim is charming and generally cheerful, and yet there’s a mantle of sadness to him too, with his lost love and the family he never had as a result, and also the awareness of an active man nearing the end of his life, no longer able to do all he once did.

If Miss Cornelia and Captain Jim have darker hints to them, Leslie is an open tragedy.  She becomes Anne’s new “bosom friend,” but she has depths and complexities that sweet Diana Barry never had.  Leslie’s life history includes the accidental, violent death of her beloved brother, and the death of her father by suicide.  Her mother pushed her (for selfish reasons) into a marriage with a violent man, Dick Moore.  Montgomery never, ever speaks directly about rape or sexual assault, but I feel sure it happened to Leslie in her marriage.  (There’s also repeated references to a “story” about Dick and a girl over at the harbor…we never learn more than that.)  Dick went to sea shortly after marrying Leslie, and was presumed dead–then found with amnesia and severe mental impairment and brought home again.  Leslie has been caring for him for the last ten years.

With all that behind her, it’s not surprising that Leslie is an aloof, often angry character, who only slowly opens up to Anne or the reader.  She’s a powerful character, with far more complex feelings and personality than Anne’s girlhood friends.

I’m emphasizing the darker strains here, and lighter elements certainly exist as well.  But I don’t think I’m giving the darkness undue weight.  So why is it not a terrible, dark novel?  Well–because like Anne of Ingleside, it’s also filled with gentle humor, beautiful nature, warm friendships and ultimately a happy ending (even for Leslie, though it’s slightly contrived–but I’ll take it!)

So I’ll end with a happier bit of the novel.  This book introduces a phrase used in the rest of the series.  Miss Cornelia refers to congenial people, people she feels could be friends, as “the race that knows Joseph,” short-handed to the race of Joseph.  Anne swiftly adopts the phrase too.  Montgomery never explains the origin.  I never questioned it much as a kid, until one day I turned to the first page of Exodus and read “Then a new king who did not know Joseph came to power.”  I about fell over.  Much later, reading her journals, I found Montgomery mention that this was a phrase in her own life, one she picked up from her beloved cousin Frede–who was certainly of the race that knew Joseph. 🙂

I don’t think Montgomery’s novels always get the respect they deserve, because they’re seen as light-hearted, pastoral stories for young girls.  Anne’s House of Dreams is not that.

Well, actually, it is that.  It’s just that it’s so much more too.  And that’s really what’s impressive about it.

Other reviews:
Stray Thoughts
Kate’s Book Blog
Luv to Read
Anyone else?