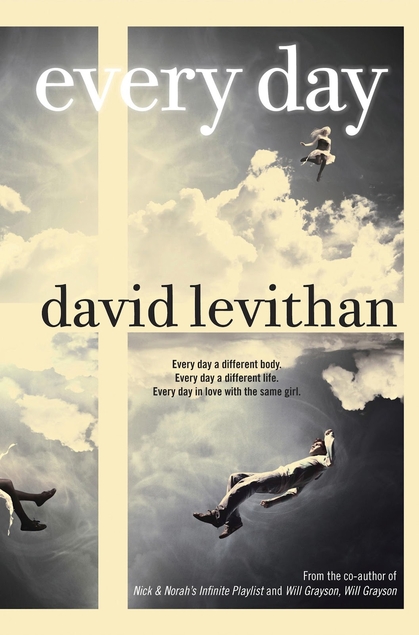 A friend recently recommended a book to me with an intriguing premise: Every Day by David Levithan.  And it was every bit as intriguing as I hoped–and then some!

Our narrator, A, wakes up in a different body every day.  And it’s not that their body is changing–they’re entering a different person’s body every day, though always someone their own age, sixteen.  They’re still themselves, but they have control, can access their host’s memories, and generally try to live that person’s life for that day.  A has always been this way, and never known anything different.  There are drawbacks, but they do okay–until they fall in love, and want to have their own life.

Weird, right?  But SO interesting!  I listened to this on audiobook, and pretty much played it every spare minute I could until I got to the end.  I was just totally hooked to find out how A/the author would navigate the next complication to arise, and to see what life A would be visiting the next day.

This was also a very nicely done love story.  I am usually not a fan of instalove romances (they’re a pet peeve, in fact) but this was one of the rare ones that really made it work.  When A meets Rhiannon (while occupying the body of her boyfriend Justin), A is pretty immediately smitten.  But it was such a nice blend of physical attraction, really seeing who she is as a person, and sharing a very meaningful, magical afternoon together, that it worked for me.

The beginning of the love story, in fact, was beautiful.  And then the romance got more complicated.  And maybe that’s good?  I like a happily ever after ending, but it was also kind of nice to see real relationship complications arise.  I know, A switching bodies every day is not a typical relationship challenge (!) but within that framework they actually experienced some recognizable issues.  Rhiannon is amazing out the gate, and stays amazing, but also begins to reveal genuine flaws and weaknesses once we’re past one magical day, that weren’t obvious at first.  They also have challenges around balancing a relationship and the rest of life.  I don’t think A ever quite grasped how demanding they became of Rhiannon–not so much from the body perspective, but in terms of how much of her time they wanted.  Though maybe that’s a thirty-something perspective on an intense sixteen year old romance?  Of course we must see each other every single day!!

A is a really interesting character, for the body switching reasons but also just as a person.  The body switching could go so wrong so fast, but A has a pretty strict moral code about what they do and don’t do in someone else’s body, which actually kept that aspect of it pretty comfortable.  We gradually learn more about what the host is experiencing/remembering, and it’s about as harmless as it can be made with this concept.  So FYI there, if the premise is weirding you out.  Anyway, A is just a great person I enjoyed reading about–a little demanding, as noted, but on the whole responsible, mature, compassionate, and very accepting.

Which brings me to a big strength and a glaring flaw of the book–because nothing is perfect, so sadly there was one.  The strength: A, and the book overall, is very accepting of (almost) everyone.  A has no self-identified gender and no race, bouncing between bodies of different sexes (including one trans host), different orientations, different ethnicities…also different religions, different socioeconomic levels, different chemical imbalances (one host is suicidal) and frankly different levels of responsibility–some of A’s hosts have made serious mistakes around drugs or alcohol.  And A doesn’t judge anybody.  They don’t approve of the mistakes mentioned above, but they’re always compassionate, and in terms of things like race, gender, religion, they really emphasize how much we all have in common.  And that’s awesome and I loved it.

Except.  In this whole big range of acceptance of everybody, there was one really awful chapter where A’s host is obese.  And that is when A gets incredibly judgy, and Levithan passes up every opportunity to actually explore what would lead a sixteen year old down that path.  Suicidal because of depression is treated with compassion (as it should be), but the idea that someone could be very overweight for physical or psychological reasons?  Nope.  “Negligence and laziness” are actually provided as reasons.  A is deeply uncomfortable in this body, for physical and social reasons, but never once reflects on how hard it would be to live in that body all the time.  I find it pretty disappointing that a book that was this good made a stumble this big.  So if you read the book (and you totally still should) feel free to skip this chapter.  A and Rhiannon both have an outsized (no pun intended) inability to deal with the situation.  That’s all you need to know, on to the next host and avoid the nasty remarks.

One other, smaller drawback, was that I didn’t think Rhiannon’s changing feelings and motives were always well drawn out.  Some of her choices are a little surprising…but I’ll avoid spoilers!  Some of this is necessity (we’re not in Rhiannon’s head), and also–there’s a sequel, telling the same events from Rhiannon’s point of view.  Which I’m quite curious about now.

There is also a movie version that I’m interested to check out.  Because on the whole, this was one of the most intriguing, page-turning (even if it was on audio) books I’ve read in a long time!

One thought on “Book Review: Every Day”