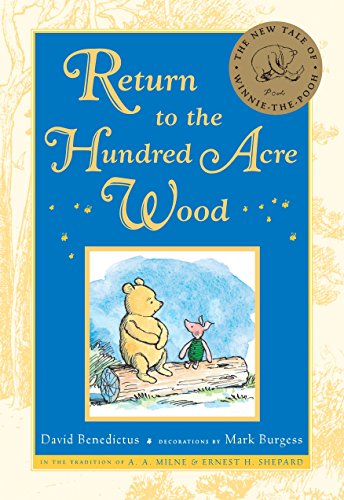 I always take a rather dim view of new authors writing sequels to classic fiction. Sometimes it works, but I’m always suspicious—so Return to the Hundred Acre Wood by David Benedictus proved to be a pleasant surprise.

It might have helped a great deal that he began with an Exposition, a kind of foreword, of the author speaking to the characters about the possibility of a new story (Eeyore is sure it will all turn out wrong). The author concludes that he can really only guess and hope that he will guess right–and the characters promise faithfully to help him get it right.  And this at least makes me feel that he has a good firm grasp of the size of the shoes he is attempting to fill, which makes me feel much better on the whole subject.

The story opens with a rumor going through the wood that Christopher Robin is coming back. He does—and all the familiar characters, Pooh and Piglet and so on (even Rabbit’s “friends and relations”) proceed to have a series of adventures, from a spelling bee to a cricket match to a quest for a hidden well during a drought.

The drought is just about as serious as anything gets. On the whole these are sweet, simple stories of mostly quiet adventures—as they should be. Benedictus clearly did his homework well, knowing the little details and including the right features, like an occasional Hum composed by Pooh, or a bit of whimsical philosophy that seems quite in the proper spirit of the series.

Maybe most importantly, I thought Benedictus captured the characters very well. Rambunctious Tigger, wise Owl, fussy Rabbit and dour Eeyore… My favorite may be Piglet, who’s very much aware that he is only a small animal and not sure that he’s brave, but wants so much to be noticed and appreciated. Oddly enough, if any character fades a bit, it may be Winnie the Pooh—but I think that’s only because the movies have led me to think of him as the lead, while really the original books are an ensemble cast—and so is this one.

There is one new character, an otter named Lottie, who I mostly feel neutral about. I didn’t think she added much, but she wasn’t a real problem either. She was just there, part of the ensemble, and fortunately not too big a part since I’d rather read about the others.

I have just one real objection to the book, and that’s not so much a flaw as an inconsistency with my personal understanding of the series. At the end of The House at Pooh Corner, Christopher Robin goes away, presumably to school. But the tone makes it so very, very clear that he is not coming back. Going away to school is really a metaphor for growing up, and you can’t go backwards with that. Grown-up Wendy can’t fly back to Neverland, and Christopher Robin can’t come back to the Hundred Acre Woods.

I’d rather like to pretend that Christopher Robin grew up and went on to a long and happy life, died at a ripe old age—and then, in an Aslan’s Country-style way, returned to the Hundred Acre Wood. Or at least the boy he was did. I’m sure that’s not what Benedictus had in mind, but it could actually work for most of the book…until the last chapter when Christopher Robin returns to school for the next term. Oh well.

But like I said, that isn’t really a flaw of the book—it’s just my quirk.  And aside from that, this was a delightful, in-the-proper-spirit trip back to the Hundred Acre Woods.

Buy it here: Return to the Hundred Acre Wood

10 thoughts on “Book Review: Return to the Hundred Acre Wood”