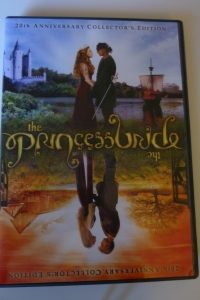 Valentine’s Day was last week, so perhaps it’s an appropriate day to revisit a favorite movie with a lovely romance.  I just finished saying I don’t revise Classic Posts, but this one does require mentioning one changing view.  I think I was too hard on Buttercup–she has her moments of strength as a heroine.  She actually has two different problems–she’s oddly impassive in some key moments and, as Cary Elwes pointed out in his memoir, in a movie full of funny lines, Buttercup gets none of them.

I rewatched this movie just recently at a Fathom Events showing, and I really tried to have a different view of Buttercup.  It was maybe a little better?  But I still don’t love her.  Ah well.  It’s still a nearly perfect movie.

I love fairy tales, and retold fairy tales, and fairy tale-inspired stories.  I have great success reading books like that, and sometimes I try a movie too.  More often those turn out to be very cheesy…but sometimes it works, as with one of my favorites, The Princess Bride.  It can be cheesy at times too, but in a good way, and all in all it’s a very nearly perfect movie.

There’s a book too, which I have read, and which is also truly excellent.  It’s been a long time since I read it, though, so that review will have to wait until I get a chance to re-read it.  In the meantime, let’s talk about the movie.  It’s at its twenty-fifth anniversary, so I’d like to assume everyone’s seen it…but I’ve learned not to assume that about any movie.  And I do have a friend who just saw it for the first time a month ago.

The Princess Bride starts with an adorable frame-story, about a grandfather reading the book The Princess Bride to his grandson, who had been ill.  The boy pretends indifference, but is drawn into the story.  It’s about the beautiful Buttercup, who is going to marry her beloved farmboy, Westley.  But Westley goes off to seek his fortune, is reportedly killed by the Dread Pirate Roberts, and Buttercup ends up unwillingly engaged to the nasty Prince Humperdinck.  She’s kidnapped shortly before her wedding, carried off by mastermind Vizzini, slow-witted and good-natured giant Fezzik, and brilliant swordsman Inigo Montoya.  They’re pursued by a mysterious man in black (whose identity will probably not turn out to be all that much of a shock).

And it all comes together to be a nearly perfect movie.  There’s romance, swordfights, death, miracles, your choice of heroic figures, a nasty prince, intrigue, treachery, the Pit of Despair, the Cliffs of Insanity and an enormous amount of funny lines.  The effects are not fantastic (as with the Rodents of Unusual Size, or the ROUS) but that’s a minor point.  The more major point that has me putting that “nearly” before “perfect” is Buttercup.  All this movie needs is a really strong female heroine, and Buttercup is not that.  But she serves her purpose, and everyone else is wonderful.

Not to mention, the movie features such timeless wisdom as “Never go in against a Sicilian when death is on the line,” “There’s not much money in revenge,” and “True love is the greatest thing in the world–except for a nice MLT, mutton, lettuce and tomato sandwich.”  There are endless other iconic quotes, like “Inconceivable” and “As you wish.”  And if none of this paragraph makes sense, all I can say is that it’s a sure sign you should watch the movie!

But if you have any fondness at all for swordplay and fantasy and fairy-tale-type stories, then you should watch The Princess Bride.